Home at work for most

PUTRAJAYA: Between 15% and 35% of civil servants are working in the office although the conditional movement control order that was enforced on May 4 allows government offices to resume full operation, says Public Service Department (PSD) director-general Datuk Mohd Khairul Adib Abd Rahman.

He said this data showed that the actual work situation was not as described by certain people.

He cited several examples of the number of staff working in the office.

For the Energy and Natural Resources and Federal Territories ministries, the workforce is only 15%.

At the Housing and Local Government Ministry, the percentage of civil servants who returned to the office is 29%.

“The data shows that although government offices are now in full operation, the approach taken by department heads is to minimise the presence of staff in the office by asking most employees to work from home.

“The flexi-hour and work from home options are being practised at government offices to support continued efforts to curb the spread of Covid-19,” he said yesterday.

“While these working options are in practice, ministries and departments must ensure the government’s delivery system functions fully and that department heads are to use their discretion in managing their human resources.

“The PSD hopes that those dealing with government offices will adhere to the new normal by following guidelines that have been issued by the National Security Council, Health Ministry and the relevant ministry and departments,” said Khairul Adib.

On Monday, Cuepacs claimed that government offices in Putrajaya had more than 60% of staff working.

of staff should be working in the office.

“Cuepacs wants department heads to restructure the work schedule and management so that more civil servants are working from home. Only those whose work is in line with efforts to revive the economy should be working from the office,” he said.

Adnan proposed that only those who were truly healthy be given office duties for now and those with illnesses such as diabetes and hypertension, and over 50 should work from home. 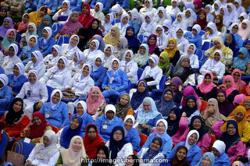