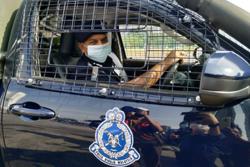 JOHOR BARU: A Singaporean couple with almost RM200,000 worth of drugs and seized items was among those nabbed by police during raids.

The man, 25, and woman, 23, were arrested at about 8.20pm in a raid at a condominium along Jalan Persiaran Danga Perdana in Danga Bay on Monday (April 13).

"Upon inspecting the two suspects, we found a total of 1,009 pills of ecstasy and 4g of syabu (methamphetamine),

"Aside from the drugs, we also seized a Singapore-registered silver BMW, jewellery as well as Singapore and Malaysian currencies," he said, adding that the total amount from the items seized, inclusive of the drugs, was worth RM197,124.

The case is being investigated under Section 39B of the Dangerous Drugs Act 1952, which carries a mandatory death sentence.

The raid on a homestay in Masai saw the arrest of eight men and three women, aged 15 to 23. Upon inspection, the police found about 2.08g of ketamine and four ecstasy pills.

Comm Ayob said that seven men and all three women tested positive for ketamine and methamphetamine.

"Two men and one of the women had drug records.

"Initial investigations showed that the suspects were not residents and failed to provide a valid reason for their gathering," he said, breaching the movement control order (MCO) under Rule 11 of the Prevention and Control of Infectious Diseases Regulations 2020.

Comm Ayob said there were still those who continued to be selfish and disobey the MCO.