PAS: S'wak food aid for the poor bogged down by certain GPS politicians

Claims have surfaced that urgent food-aid distribution in Miri bogged by politics. -Photo by Stephen Then

MIRI: PAS Sarawak wants to know why some poor villagers and needy folk in urgent need of food aid are being compelled to fill forms by certain politicians representing the state government.

Sarawak PAS Commissioner Jofri Jaraiee said Its office had received complaints from needy folk who could not get food aid in places like Kampung Lusut, Tudan and Kuala Baram.

"They said when they sought help from certain politicians, they were told to fill in application forms.

"Why is there a need for those living in poverty to fill in application forms when they ask for food aid from the Gabungan Parti Sarawak (GPS) offices?

"The food aid that the GPS state government has announced are meant for all those facing difficulties during this MCO period.

"The food aid is funded from the taxpayers' money.

"This aid should be distributed quickly on the ground based on the actual needs of those who are disabled, and those living in poverty.

"There should be no politics involved," he said in an email.

PKR Sibuti branch chief Zulhaidah Suboh also said she had received complaints that there are certain groups of villagers being pushed away when seeking help from certain GPS offices.

"These villagers said the people in the GPS office told them to get help from the Opposition," she said.

"The divisional and district central committee handle the identification of the target groups and the delivery process.

"We are trying to reach as many of the needy folks as possible," she said.

Fatimah said efforts were being made to deliver food to eligible recipients in all GPS and Opposition state constituencies.

She said it was not a norm for needy folks to have to fill in application forms to get the food aid.

Those who still cannot get their food-aid should submit their details to the divisional or district disaster relief committees, she added. S'wak CM: Up to new govt to re-table constitutional amendment 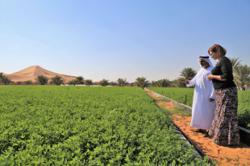 Cooked up for climate, UAE’s high-tech food plan pays off in pandemic