Blow by blow: One of the houses belonging to a resident of Kampung Dulang Kecil severely damaged by heavy rains in Yan, Kedah. — Bernama

ALOR SETAR: Up to 86 houses and five shops were badly damaged due to heavy rains followed by strong winds on Sunday afternoon.

“The Kota Setar district saw the highest number of houses affected, followed by Sik with 10 houses and five shops, Yan and Kubang Pasu nine houses each,

Pendang (four), Langkawi (two) and Pokok Sena and Baling one house each.

“No injuries or fatalities were reported and no evacuation centres were set up,” she said in a statement here yesterday.

Halimaton Saadiah however said appropriate assistance would be provided to the victims in their respective areas. — Bernama 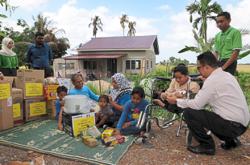