A probe conducted by both committees has found that a 53-year-old man from Brunei who had tested positive for Covid-19 had gone to Indonesia, then to the Sri Petaling Mosque in Kuala Lumpur before flying to Miri and returning to Brunei via the Miri-Brunei land border.

Speaking about this, Miri MP Dr Michael Teo Yu Keng said on Monday (April 6) that the Health Ministry should look into the travel history of this man with the help of their Brunei counterpart.

"From the information that is going around, it is said that this man had visited Miri twice on March 3 and 6," said Dr Teo.

Meanwhile, the Miri Divisional Disaster Relief Committee said that it found that the man had travelled to Indonesia before going to the tabligh event at the Sri Petaling Mosque from Feb 27 to March 3 before flying to Miri.

"At Miri Airport, he was allowed to pass as he did not have any fever detected by the thermal scanner at that time and he did not declare any symptoms to the health personnel at the airport," said the Miri committee.

It added that the Immigration Department at Miri Airport gave him a one-day transit pass and he was escorted by police to the Sungai Tujuh immigration checkpoint 35km away from Miri before heading back to Brunei.

"Brunei subsequently declared that he is Covid-19 positive," said the Miri committee in their latest updates.

It added that the Miri Health Department has identified those who had been in close contact with the man during the KL to Miri flight and during his transit in Miri.

"Not everyone on board that flight was exposed. Those who were in close contact are being located and will be required to undergo health tests," said the Miri committee.

The city has 11 patients undergoing Covid-19 treatment in isolation wards and two deaths have been recorded at Miri Hospital.

On March 9, the Brunei Health Ministry confirmed that one of their citizens was infected with Covid-19 and had gone to the Sri Petaling mosque in KL before flying to Miri and heading back to Brunei by land.

This sparked worries here in Miri, which is only 35km away from Brunei by land. 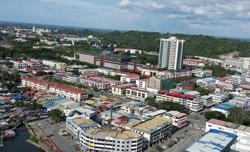 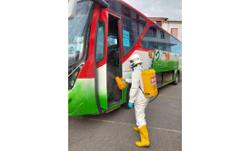