SINGAPORE (The Straits Times): All short term visitors will no longer be allowed to enter or transit through Singapore from 11.59pm on Monday (March 23) in view of the heightened risks of importing coronavirus cases into the country.

Work pass holders and their dependents will be allowed to return to Singapore only if they work in sectors that provide essential services such as healthcare and transport.

This will also kick in at 11.59pm on Monday (March 23), the Ministry of Health (MOH) said in a statement on Sunday.

The measures were announced a day after two patients - a 75-year-old Singaporean woman and a 64-year-old Indonesian man - died from Covid-19 due to complications. They were the first deaths the Republic has seen.

National Development Minister Lawrence Wong said at a briefing on Sunday morning that the measures to "significantly tighten" Singapore's borders are taken in the light of the rapidly escalating virus outbreak around the world.

Previously, except for a handful of countries, short-term visitors from elsewhere were allowed to come into Singapore but were issued a 14-day Stay-Home Notice (SHN) upon arrival.

This meant, however, that resources were being expended to serve and enforce SHNs on them, and if they fell ill, to provide them with medical treatment. On Saturday, there were still 533 short-term visitors arriving in Singapore.

"In Singapore, almost 80 percent of our new COVID-19 cases over the past three days' were imported, most of them Singapore residents and Long Term Pass holders returning home from abroad. These imported cases had travel histories to 22 different countries," MOH said.

There are 432 cases of coronavirus patients in Singapore as of Saturday evening (March 21).

A total of 140 cases have fully recovered from the infection and have been discharged from hospital.

Of the 290 confirmed cases where the patients are still in hospital, most are stable or improving. A total of 14 are in critical condition in the intensive care unit.

In recent days, most of the new patients in Singapore have been imported cases, that is, returning residents and long-term pass holders with travel history to Europe, North America, South-east Asia and other parts of Asia.

Besides strict border controls, rigorous contact tracing, quarantine and home isolation, the Government has implemented safe distancing measures such as smaller crowd sizes and keeping safe spaces around individuals, especially vulnerable segments of the population like the elderly.

For example, all events and gatherings with 250 or more participants are to be suspended until June 30, while the suspension of all social activities for seniors by government agencies will be extended for another two weeks until April 7.

In a Facebook post after the two deaths were announced on Saturday, Prime Minister Lee Hsien Loong sent his deepest condolences to the patients' loved ones. He said Singapore must brace itself for more losses even as healthcare workers do their best to care for patients.

Lee also urged everyone to work together with the Government in its efforts to slow the spread of the virus. 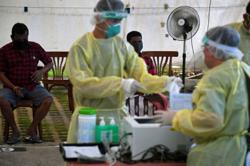