Eateries to cater for takeaways and deliveries only

PUTRAJAYA: Eateries, stalls and restaurants can stay open but only to cater for takeaway and delivery.

“If restaurants are open for many to come, we do not allow, but if it is for takeaway, that is all right.

“That will make it easier for people to access food. If they can deliver to houses, we encourage it.

“But to open their outlets, it will defeat the whole purpose, ” he told reporters yesterday.

The government has decided to enact the movement control order from March 18 to March 31 throughout the country.

The measure will restrict movement and congregation at religious, sport, social and cultural events.

“Our members will remain open to allow customers to order takeaways or deliveries through GrabFood and Foodpanda, ” he said. 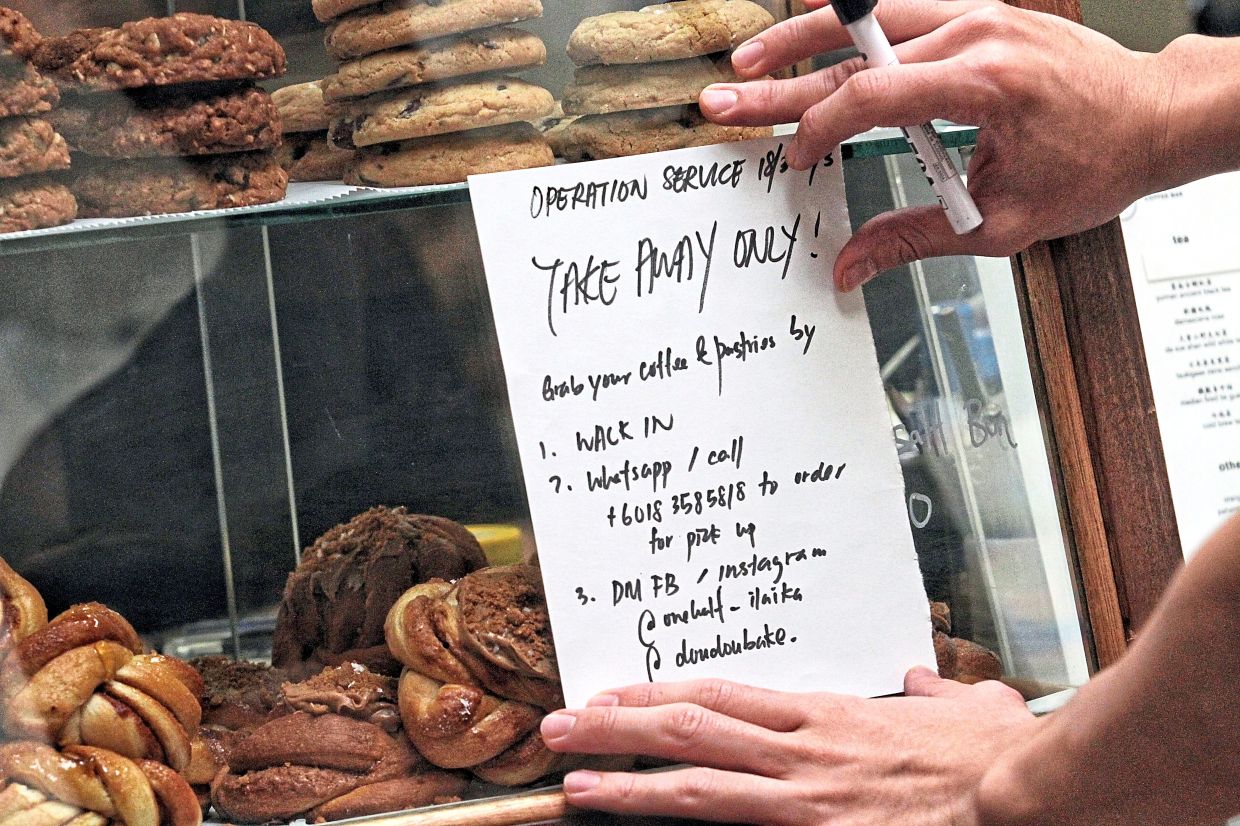 Take it away: A cafe in Sea Park, Petaling Jaya, still unsure of the situation or the clarity of the restricted movement rule for now, putting up a notice for customers.

He added that Presma will appeal to the government to allow limited dining-in to mitigate the losses suffered by members due to a drop in business over the last few weeks.

“We hope the government will consider allowing us to open for dine-in breakfast between 7am and 9am and lunch between 1pm and 2pm, provided we space the tables apart by a metre, ” he added.

He said members experienced a drop of between 20% and 30% in business following Covid-19 infections in Malaysia in late January.

“Since then, our business has dropped between 30% and 40% and we expect it to decline even further to about 60% and 70% during the restricted movement order period, ” he added.

Jahawar Ali said Presma will also hold talks with food delivery companies to see if they would be able to lower the 30% surcharge imposed for their delivery services.

“Food delivery companies will surely see a boom in business of between 300% and 400% during the restricted movement order period.

“Hopefully they can reduce the surcharge by going for volume instead, ” he added.

He said Presma and about 40 other non-governmental organisations will submit a memorandum to Finance Minister Datuk Seri Tengku Zafrul Tengku Abdul Aziz on measures to mitigate losses suffered by small and medium enterprises in several sectors due to Covid-19.

He said while some of his members in bigger cities engage in food delivery services to send food to customers, coffeeshops in smaller towns will be encouraging customers to take away.

“Customers cannot stay in the coffeeshop, sit in a group and catch up with old friends. That is out of the question now, ” he said.

Coffeeshops, he said, are bracing for a significant hit on their business, made even worse as they still have to pay rent and other costs.

Ho, who said he has 20,000 vendors in his association, added however that some of his members will be closing shop for the two weeks.

“Some members have expressed concern at having to turn away customers who may get angry and not return to their shop, ” he said.