For hunting: Jefree talking about traditional tools and weapons at the Seletar cultural centre in Johor Baru.

JOHOR BARU: The Seletar cultural centre at Kampung Sungai Temon, near Taman Perling here, has got to be one of the best-hidden gems in the state as it highlights the lives of Orang Laut or better known as Orang Seletar, one of the Orang Asli tribes in Johor.

The villagers and the Malaysian Society of Marine Science (MSMS) jointly set up the centre, which covers about 232sq m, with RM60,000 funding from the Global Environment Facility.

It displays photography of the challenges faced by the Orang Asli due to the rapid development in Iskandar Malaysia.

The centre is now in the care of Salim’s third son.

Jefree said the centre was a popular location for students and environmental conservationists to conduct marine research and population study on the Orang Seletar.

“We offer a tour around the village starting at the gallery before taking a boat ride around Danga Bay and opposite Kampung Bakar Batu.“Visitors will then be brought to a mangrove forest to see the breeding ground for fish, ketam bangkang (mud crabs) and prawns, ” he said.

Jefree said the tour usually ends with a cultural dance featuring folk songs, and handicrafts of the Orang Seletar at the gallery.

“The gallery also shows maps documenting the story of Orang Seletar, and replicas of the traditional boats and hunting tools, ” he added.Jefree said the centre would ensure the Orang Seletar culture was preserved and that the younger generation does not forget their roots.“This is the only Orang Seletar cultural centre managed by the villagers themselves. There is another one in Selangor, but it’s under the care of the state government.

“All proceeds from the activities will be used to preserve the gallery which is built using wood and requires constant care, ” he said, adding that the gallery has received visitors from Singapore, Taiwan, Indonesia, Thailand, Germany and Australia. Jakoa to come to the aid of Orang Seletar 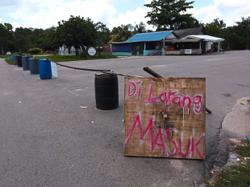 Jakoa: Orang Asli told to abide by MCO and prevent spread of virus