Those with 'controversies' will not be in the exco, says Perak MB

The Mentri Besar said the list of exco members would not include those with "controversies".

“We want candidates who are 'clean', and those screened by agencies like the police and the Malaysian Anti-Corruption Commission (MACC), ” he told reporters after he was sworn-in as the 13th Mentri Besar before Sultan of Perak Sultan Nazrin Muizzuddin Shah at Istana Iskandariah here Friday (March 13).

On March 10, Faizal tendered his resignation as Mentri Besar, after Parti Pribumi Bersatu Malaysia (Bersatu) pulled out of the Pakatan Harapan coalition.

He had received the largest number of support from the state assemblymen.

Prior to this, those who were also in the running for the post were state PAS commissioner Razman Zakaria and state Umno chairman Datuk Saarani Mohamad.

Faizal said he would ensure a good team of exco members would be appointed to ensure all meetings run smoothly for the benefit of the people.

“I will be meeting with Saarani and Razman soon to discuss on the exco list.

“I am hoping within a week, they can be sworn-in, ” he added.

Faizal said his priority was to move forward, to ensure the interest of the people are looked into.

“During the political uncertainty, there were no exco meetings for five weeks, and that is a loss for the state, ” he added.

Meanwhile, Razman said the decision to appoint Faizal by the Sultan was a right one.

“Faizal made a sacrifice by resigning as mentri besar from the previous state government to form a new one, ” he said. 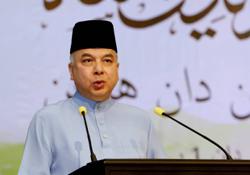 13th Perak MB to be sworn in today