Kamarudin Abdullah, 61, the 10th witness for the prosecution and the former Procurement and Asset Management Division secretary at the ministry told the court this, explaining that the letter, dated July 19,2017, bearing the ministry's letterhead, was sent to Najib who was also the Finance Minister at the time, and that it was not sent through Kamarudin.

According to Kamarudin, the interim payment was to enable Jepak Holdings to supply diesel to rural schools in Sarawak, and if the payment was not made, the schools would be in darkness.

"I was only involved when the interim payment of about RM60mil-RM70mil was made (to Jepak Holdings)," he said during cross-examination by Rosmah's lawyer Azrul Zulkifli Stork.

Rosmah, 68, the wife of the former prime minister, is on trial for soliciting RM187.5mil from Jepak Holdings to secure a RM1.25bil hybrid solar contract to supply energy to 369 rural schools in Sarawak.

In his previous court testimony, Mahdzir had said that he had instructed an officer at the ministry to prepare the letter in response to a request from Rizal as Jepak Holdings was facing problems in securing payment for works related to diesel generator sets, undertaken since January 2017.

Kamarudin, who was testifying on the 12th day of the trial, was also questioned by Azrul about Mahdzir's action in ordering the removal of a clause in the letter of acceptance (SST) concerning the hybrid solar project. The witness replied that changes to the clauses could only be undertaken on the instruction of the Finance Ministry.

Azrul: Do you agree or disagree that there was no instruction from the Finance Ministry (to make a change to the clauses)?

Kamarudin: There was none.

In previous court testimony, Mahdzir had said that he had agreed to remove a clause from the letter of acceptance after receiving a call from Rizal on behalf of Rosmah on Nov 10,2016.

Mahdzir, the prosecution's fifth witness, had told the court that the clause related to the ministry's right to terminate the contract and reduce the number of schools involved in the hybrid solar project, in the event that the schools were connected to an electrical grid. 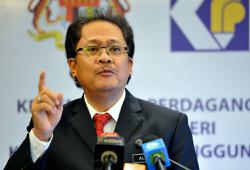