KUALA LUMPUR: Police arrested 39 women believed to be working as guest relation officers (GROs) during a raid at an entertainment outlet in Bandar Kinrara, Puchong.

Police also rescued a 17-year-old Vietnamese girl, believed to be a human trafficking victim, in the same operation.

a Ukrainian, an Indonesian and a Russian, aged between 20 and 50, were detained at 11.45pm on Friday.

“Police also detained 15 locals who were working at the premises in various positions as manager, supervisor, receptionists, and security guards to facilitate investigations,” he said yesterday.

SAC Mohd Zani said a preliminary investigation found the entertainment outlet did not have any licence issued by the local authorities, including the licence to serve liquor.The case is being investigated under Section 12 of the Anti-Trafficking In Persons and Anti-Smuggling of Migrants Act 2007, Section 55B and Section 6(1)(c) of the Immigration Act, Section 39B of the Immigration Regulations 1963 and Section 35 (1) (a) of the Excise Act 1976.

In its Facebook posting yesterday, MBPP said it issued four compounds to the premises during the raid.

Among the offences were not having valid business licences and violation of billboard licences.

The raid, which began on Friday night, caught the business operators by surprise. 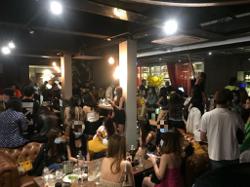