Setting a record: Members of the Melaka Gao Feng Lion and Dragon Dance Athletic Association displaying a few of the lions and dragons that will be taking part in the event at Jonker Walk.

MELAKA: The state’s Gao Feng Lion and Dragon Dance Athletic Association is set to enter the Guinness Book of World Records for being the first troupe to assemble 100 lions on a single stage on Chap Goh Mei.

Dragon and Lion Dances Federation of Malaysia secretary-general Yong Kheng Chien said the event would be held at the iconic Jonker Walk here on Saturday.

“We have invited representatives from the Guinness World of Records and the Malaysia Book of Records to register the record-breaking event.

“However, our guests from China are unable to witness the meaningful event due to the novel coronavirus outbreak, ” he said after the troupe’s performance at the Star Media Group’s Melaka bureau here yesterday.

The troupe – parading 14 lions, a dragon and a “God of Prosperity” – enlivened the festive mood at the bureau in conjunction with the Chinese New Year celebration.

Gao Feng recently emerged as the Asian champion by blending its performances with gamelan and other traditional Malay music under the Luminous Dragon Dance category at the fifth Asian Dragon and Lion Dance Championship in Chongqing, China.

Malaysia won the award for the first time during the biannual championship that was represented by all the official and national champions of countries affiliated with The Dragon and Lion Dances of Asia, a member of Olympic Council of Asia. 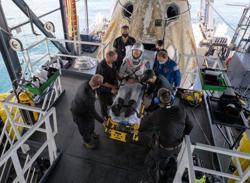