PETALING JAYA: The biggest threat to Malaysian news publishers and broadcasters are Facebook, Google and piracy, according to a research report by CGS-CIMB Securities Sdn Bhd.

While news publishers have invested millions over the years on their digital strategies, it is these US technology giants that are reaping the benefits, said the stock market analyst.

“According to Media Partners Asia, the share of Internet adex (advertising expenditure) in Malaysia’s overall adex market grew by 17.5 points from 2015’s 17.9% to 35.4% in 2019, with the lion’s share going to Facebook and Google.

“With the two technological giants gobbling up a large chunk of Malaysia’s adex market, news producers and free-to-air broadcasters are hit the worst, ” said the report on the media industry’s fourth quarter, 2019 performance.

The report was authored by Kamarul Anwar and Mohd Shanaz Noor Azam, who retained their neutral call on Malaysian media stocks.

Malaysian news publishers, having seen the shift to digital years ago, have spent millions on their websites and apps, crafting digital-first business strategies and advertising packages, and investing in new technologies including big data analytics and machine intelligence.

Many news portals have also seen an upward trend in pageviews and unique visitors, but not a commensurate increase in digital adex.

“For news producers, it is an uphill battle for them to glean adex on digital platforms, seeing as Facebook and Google have a near-perfect-sounding proposition to advertisers: low rates, real-time customer analytics, and a large platform, ” said the CGS-CIMB report.

“Media executives, including consultancy firm Media Partners Asia, have estimated that approximately 80% of the digital adex in Malaysia is funnelled to Facebook and Google, ” it added.

Malaysia is not unique – the report’s authors also point out that like elsewhere in the world, Malaysia’s media sector is beset with “a years-long beating at the hands of the so-called FAANG stocks, referring to Facebook, Amazon.com, Alphabet (Google’s parent company), Netflix and Google.

“These FAANG giants are hell-bent on their global dominance for audiences and advertising dollars, ” they added.

The Malaysian media business has been hit hard, especially over the last two years. 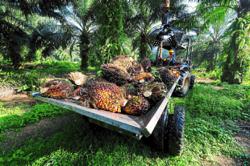