A PREGNANT cow was spared from the slaughterhouse when it appeared to have “knelt down” by bending its forelegs.

It kept bending both its front legs and refused to walk when a worker at the abattoir tried to drag it off a lorry in Guangdong, China.

Its eyes also seemed teary, China Press reported, quoting The Paper, which is a news outlet in China.

One of the workers, who filmed the scene, shared the footage on WeChat.

Animal lovers who saw the video contacted the slaughterhouse to save the cow.

In another footage, the cow was seen kneeling down again in an apparent sign of gratitude when it was transported away from the slaughterhouse to the Golden Lion Buddhist temple in Jieyang that had agreed to adopt the animal.

> The daily also reported that the king of fruits will be a “star” during the Chinese New Year celebration as the festival would coincide with the durian season.

The supply of durians would be abundant, said Lai, adding that durian fans would get to enjoy the different species at a cheaper price this festive season.

> Kwong Wah Yit Poh reported that J-pop songstress Ayumi Hamasaki dropped a bombshell on New Year’s Day by announcing that she had become a mother.

The 41-year-old diva revealed the news on her official fan club site, saying that she had given birth to “an angel late last year”.

According to Japanese news reports, Hamasaki had a baby boy in November.

Many fans were surprised as the J-pop star had not looked pregnant prior to this.

Her background dancer, Shunpei Araki, 21, is said to be the father of the child.

However, Hamasaki, who is not married, did not reveal further details. 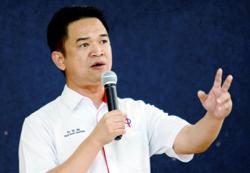