Central Seberang Prai OCPD Asst Comm Nik Ros Azhan Nik Abdul Hamid said the suspects, aged between 16 and 19, were arrested at about 4am Thursday (Jan 2) at the Sungai Buloh R&R by a police team.

Asst Comm Nik Ros Azhan said investigations revealed that all four were involved in the robbery at the 24 hours convenience store located at Jalan Tanah Liat, Bukit Mertajam, at 11.28am on Wednesday.

"The suspects tried to evade police by taking an express bus from Jeniang to Kuala Lumpur at about 11pm.

"They were however arrested by police at about 4am with the help of the bus driver at the Sungai Buloh R&R," he said in a statement.

The suspects, he said, arrived at the convenience store on two motorcycles and two of them entered the outlet, wearing helmets, while the others waited outside with their bikes.

He said one of the suspects inside took a drink from the fridge and approached the counter, as if to pay for the item.

As the cashier was scanning the item, ACP Nik Ros Azhan said the suspect took out a machete and demanded for all the cash in the store.

He said both suspects then fled from the scene with their accomplices.

Police also seized two motorcycles and a 40cm machete during raids at an apartment in Juru and the KTM station in Jalan Baru Perai.

He added one of the suspects also admitted of having been involved in several robbery cases in the district since early 2019 with his friends.

"They also admitted for having been involved in other robbery cases which were not reported to the police; we will bring the suspects to identify where they have committed the crime once we obtained remand," he said.

All four have no prior criminal record and will be remanded on Friday (Dec 3).

The case is being investigated as armed robbery. 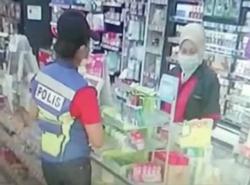