Woman arrested after video of sex at temple goes viral BUTTERWORTH: The police have arrested a 42-year-old woman after sex videos allegedly performed at the Wat Phothicarentham here went viral.

“Police arrested the suspect after the temple chairman lodged a police report on the viral 59-second video.

“She is believed to have committed the indecent act with another man in his 40s,” said North Seberang Prai OCPD Asst Comm Noorzainy Mohd Noor on Monday (Dec 23).

He said the woman's urine tested positive for drugs and added that police are currently tracking down the other suspects, including the man.

The woman has since been remanded for four days pending an investigation of the case under Section 294(a) of the Penal Code for committing an obscene act in public and under Section 233 of the Multimedia Communication Act 1988. 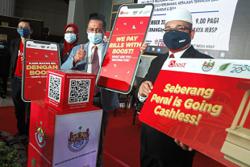