Job well done: Comm Mazlan (centre) and other officers looking at the stolen cars that were seized.

KUALA LUMPUR: Police have crippled a syndicate using high-tech gadgets to steal luxury vehicles that are then resold as cloned vehicles.The syndicate was able to clone a vehicle’s key-fob (security device used to access services and data) and drive off within 10 minutes.

City police chief Comm Datuk Seri Mazlan Lazim said they were alerted to the syndicate’s activities after receiving a report about a missing luxury vehicle.

The 68-year-old victim had his RM400,000 Toyota Vellfire stolen in Taman Bukit Maluri, Kepong, at about 2am on Nov 6.

“We formed a task force and managed to track down and arrest one of the members of the syndicate in Melaka on Nov 25.

“We interrogated the suspect and conducted a crackdown on the syndicate between Nov 25 and Dec 4 in Kuala Lumpur, Negri Sembilan, Johor, Melaka and Kelantan.

“We arrested eight suspects, including an Indonesian man and a local woman.

“They are aged between 25 and 53, ” he told reporters at the Sentul police headquarters yesterday.

“The vehicles are estimated to be worth RM5mil. We also seized equipment such as GPS trackers, key-fob replicator tools, master keys and chassis number tampering equipment, ” said Comm Mazlan.

The syndicate’s modus operandi, he said, was to place a GPS tracker on a targeted vehicle and follow it until the owner parks in an open area.They would then gain entry using the master key before using the key-fob replicator tools to create a new key-fob before driving away, Comm Mazlan added.

“They will then tamper with the vehicle chassis number and use a number of a similar existing registered vehicle which has not been stolen in order to sell it as a cloned vehicle, ” he said.

When asked, if the syndicate had purchased their gadgets online, Comm Mazlan said that was being investigated.

He said the syndicate was linked to 20 car theft cases in Kuala Lumpur, Selangor, Negri Sembilan and Johor.

“Six of the suspects have prior records for various offences. Further investigations revealed that the Indonesian suspect and the woman were not involved and had been released.

“The remaining suspects have been handed over to the Selangor police for further investigations, ” he said, adding that police were now tracking down the remaining members of the syndicate.

Those with information on the case should contact the police hotline at 03-2115 9999 or visit the nearest police station. 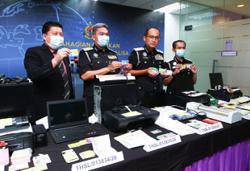