IPOH: The hearing for an interim order filed by Meeriam Rosaline Edward Paul to have full access to Tun S. Samy Vellu has been postponed by the High Court here Thursday (Dec 12).

Meeriam claims that she and the former MIC president held a customary marriage in Kuala Lumpur in 1981.

Her lawyer, RSN Rayer, said Justice Datuk Hashim Hamzah had, in chambers, set Jan 17,2020, for the hearing to be continued.

Rayer said the court granted the postponement requested by Samy Vellu's son, Datuk Seri S. Vell Paari, whose legal team is seeking a declaration from the Kuala Lumpur High Court that his father is mentally unfit to defend himself in two legal cases brought against him.

"They want Samy Vellu's mental state to be assessed by the court, with the hearing set on Dec 17 where we will also be intervening," he told reporters at Ipoh High Court Thursday.

It was reported that Vell Paari had filed an originating summonses against Samy Vellu at the Kuala Lumpur High Court to determine whether the latter is mentally incapacitated under Section 52 of the Mental Health Act.

He had also said that Samy Vellu was suffering from dementia due to Alzheimer's disease.

Meeriam, who was also represented by Ramesh Sivakumar, filed the interim order in March this year to have unrestricted access to Samy Vellu and also be paid her monthly RM25,000 maintenance pending the outcome of her main suit.

When met outside the courtroom, Meeriam said she last met him on June 13 at a restaurant in Kuala Lumpur.

"I want him to return home like he used all the time and take care of me like he promised," she said.

"I am fully dependent on him, what am I supposed to do now?" she said, adding that she has been his wife for the past 38 years and they did not have any children together. 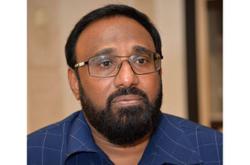