Go for it: Julian’s message to fellow youths is to pursue their passion and ignore the critics.

PETALING JAYA: Despite his triumph in one of the world’s most prestigious ballet competitions, Julian Wen-Sheng Gan has a heartbreaking story.

His father died just a month before the Genée International Ballet competition was held in Toronto, Canada, in August.

“I felt very sad, lost and emotional. It’s a feeling that is really hard to describe,” said Julian, 17.

His father, who was 63, died just two months after being diagnosed with pancreatic cancer.

“Throughout the competition and even now, I would have flashes of him, memories or certain things that reminded me of him,” he said.

But he pulled himself together and realised that he had to focus and do his best in the competition, as it was one of his father’s last wishes.

Julian became the first Malaysian to enter the final round of the competition organised by the London-based Royal Academy of Dance, one of the world’s most influential dance and training organisations. Its patron is Queen Elizabeth II.

Besides winning a silver medal, he received the Margot Fonteyn Audience Choice Award.

(The Genée, which began in 1931, is aimed at recognising the world’s most talented young performers. From next year, the competition will be renamed Fonteyn to celebrate ballet legend.)

“Winning the silver was a pleasant surprise considering that the competition was very tough.To be able to win such a prestigious competition was more of an honour rather than a merit.

“I must say, however, the experience that I got out of it is more valuable,” Julian said in an email interview.

He added that he had yet to move on from his father’s passing, though he had learnt not to hold back from what he wanted to achieve.

“I’m sure that’s what my father would have wanted me and my family to do,” said the Selangor boy.

The son of an engineer and ballet teacher, Julian started dancing at the age of three as his mother Serena Tan, 57, did not want him running around while she was teaching classes.

Eventually, he decided to pursue ballet following encouragement from Tan and his older brother Jeremie Wen-Jian Gan, who is an artiste at the Singapore Dance Theatre.

The path was not always smooth, as Julian was bullied in school for his passion.

“I was bullied because I did ballet, wore tights and looked like a ‘sissy’. At times, I felt really lonely,” he said.

But he considered bullies just one of the many challenges he needed to overcome, including his short frame, studies, injuries and loneliness.

“How I overcame these challenges is what I consider a triumph,” said Julian, who is now in his senior year at the Harid Conservatory in Florida, the United States.

“My plan is to be able to enter a ballet company once I graduate.”

Although Julian started dancing at three, it was only in 2014, when he joined the Asian Grand Prix International Ballet Competition, that he truly fell in love with the art form.

“I remember telling myself that I wanted to dance with these people from all around the world. Coincidentally, it was the results of the competition that helped take me from dreaming about dancing to actually pursuing it,” he said.He won a gold medal and a scholarship to attend the Kirov Academy of Ballet in Washington, D.C.

“Being a boy in ballet itself is quite rare. But more boys have started appearing in ballet scenes around the world, even in Malaysia,” he said.

He believes youths should not think too much about naysayers, adding: “If you love it, go for it. But if there is a time when you know that you don’t want to do it anymore, don’t keep doing it.

“Dance requires you to love the art form. If you don’t love it, you won’t be happy.” 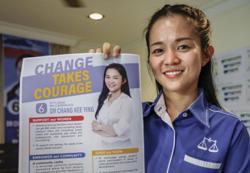