Man claims Cambodian wife ran away with their three kids

Kang with a picture of his wife and an unidentified woman with carrying two of his three children. He claims that his wife took their children back to Cambodia two months ago.

KUALA LUMPUR: A husband claims that his Cambodian wife ran away from home with their three children two months ago, and is worried about their safety.

Kang Tai Ju, a contractor from Labis, Johor said his wife went to Phnom Penh, Cambodia on July 24 this year and is refusing to send their children back.

This is despite the fact that they are registered as Malaysians and have overstayed their Cambodian travel visas.

He said that he returned to his house in Labis at about 1pm that day and found that his wife and three children were not there.

"I inspected the house and found their clothes missing," said Kang, 48.

He added that his wife initially did not answer his calls but he finally managed to speak to her when she needed money for the children's expenses.

Kang said he banked in RM1,320 to his wife, but would not give any more until she brings his children back.

In a press conference Friday (Oct 4), Kang alleged that his wife's father told her to marry a Cambodian and encouraged her to remain in her home country.

He also claimed that his wife had a boyfriend who arranged the flight to Cambodia for her and the children.

"There were four Vietnamese wives, four Cambodians, two Thais and one Indonesian, all who took their children away," said Chong.

"If the child overstays and is a Malaysian, they have an obligation to help you," he said. 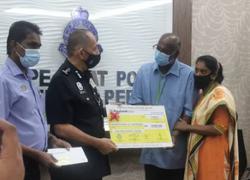