Cooling down with coconut drinks

JOHOR BARU: The Air Pollutant Index is not the only thing that is up in Johor.

For fresh coconut sellers, sales are also on the rise too.

“Normally, I would sell between 40 and 50 glasses a day. But due to the current weather and the haze, this has gone up to almost 80 a day, ” said Mazuri Lawan, 53, a coconut drinks seller in Jalan Kolam Ayer here.

Mazuri said coconut shake, which is topped with a scoop of vanilla

ice cream, was among his bestsellers.

“I normally use kelapa matang (mature coconuts) and kelapa mawar as the main ingredient to make my coconut shake, ” said Mazuri, who would usually order about 50 coconuts from a supplier who obtains the fruits from farmers in Pontian and Kluang.

Mazuri said he did not use any artificial flavouring to make the drinks.

“I always believe in quality. If the drinks I make are good and affordable, then the people will come, ” said the entrepreneur who opens his stall daily from 9am to 10pm. 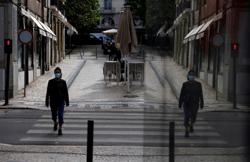