KUALA LUMPUR: Businessman Datuk Tan Eng Boon is expected to become a prosecution witness in the corruption trial of Datuk Seri Tengku Adnan Tengku Mansor after he was fined RM1.5mil for abetting the latter in graft almost six years ago.

Tan, 71, would be called as a witness in the trial of Tengku Adnan involving a RM1mil bribe after Tan’s sentencing at the High Court here, Deputy Public Prosecutor Julia Ibrahim said yesterday.

In a turn of events, Tan, who was supposed to go on a joint trial with Tengku Adnan, pleaded guilty to an alternative charge under Section 109 of the Penal Code, read together with Section 165.

“Firstly, the accused pleaded guilty before the commencement of trial and this has saved the court time.“Secondly, this is his first conviction and thirdly, the facts have been taken into account where the charge is of abetment and the amount involved is RM1mil, ” he said.The court also considered that Tan abetted another person in committing the crime and both were to be jointly tried.

“Corruption is a serious crime as it undermines the social and economic development of a country and adversely affects the social fabric of society, ” he said.

The proportionate sentence in respect of the crime, Justice Mohd Nazlan said, was a fine of RM1.5mil in default a one-year imprisonment.According to the alternative charge, Tan was accused of abetting Tengku Adnan in an offence where Tengku Adnan received for himself an RM1mil cheque belonging to Pekan Nenas Industries Sdn Bhd from Tan and the cheque was deposited into Tengku Adnan’s CIMB Bank account.

The charge also stated that Tengku Adnan knew that Tan, as a director at Nucleus Properties Sdn Bhd (now known as Paragon City Development Sdn Bhd), has relations to his own official work, whereby Tengku Adnan’s offence resulted from the abetment.

Section 109 of the Penal Code provides for a maximum two years’ jail or a fine or both, upon conviction.

In November last year, Tan claimed trial to the alternative charge and a principal charge of bribing Tengku Adnan with RM1mil as a “reward” for approving an application of a company for the increase of a plot ratio in Jalan Semarak here.

His trial was initially fixed for a joint trial with Tengku Adnan, who claimed trial to corruptly receiving the RM1mil from Tan to approve the land plot ratio.

Tan, who was out on bail, was able to go home yesterday after proceedings ended. 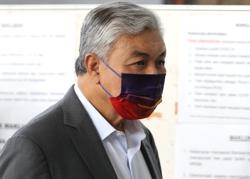