TVB actress Jacqueline Wong (pic) has reportedly changed her English name and is said to be working as a real estate agent, Guang Ming Daily reported.

In April, Wong was caught kissing married singer Andy Hui, 52 in the backseat of a taxi.

Footage of the affair went viral online and caused an uproar among fans, leading to Wong and Hui taking a hiatus from work.

Having “vanished” for more than five months, it was reported that Wong’s TVB drama Finding Her Voice is set to air in October.

It is also said that TVB will not invite her to publicity events and no one seems to be able to contact her.

Although it is not clear if Wong had really changed career, she was interested in real estate and had invested in the property market.

Besides owning properties in Hong Kong, Wong and her sister Scarlett Wong, 37, bought a 55.74sq m residential property in Vancouver, Canada, in 2016.

Her three-year-old daughter Kelly Leung was spotted sharing the same bright smile as Chung while her one-year-old son Jared was staring at his birthday cake.

With her Frozen-themed cake, Kelly was beaming with joy while smiling sweetly at the camera with Chung’s arms wrapped around her.

In the post, the 35-year-old Canadian-Chinese actress wished her children a Happy Birthday and said that they are growing up very quickly.

“I love you Kelly and Jared. You guys grow up so fast.

“Mommy and daddy will always love you forever, ” she wrote.

> A girl from Shandong, China, found a ladybird-shaped charging socket at her door but sensed something amiss only a month later, Oriental Daily reported.

The girl, who was only identified as Zhang, was using the gadget but was shocked to find a similar device in her house before making a police report.

Police investigation revealed there was a hidden camera inside the socket and it was used to record the girl’s daily activities.

There was a WiFi transmitter to upload the clips to the Internet. It is believed the videos could be viewed instantly.

After screening through the content, police managed to identify the suspect via an image in the memory card. 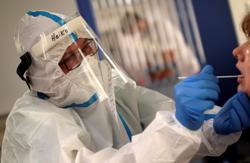