BUTTERWORTH: More than 1,000 people thronged the residence of V. Harikrishnan in Taman Riang here Saturday (Aug 18) to pay their respects to his late wife K. Puvaneswary.

Harikrishnan is the founder of Sri Ananda Bahwan restaurant chain.

As the final rites were performed, many openly wept and surged forward to offer prayers and see her face for the last time.

The touching funeral ceremony was led by a marching band as the hearse, decked with flowers and Sri Ananda Bahwan flags, made its way to the Hindu cemetery in Jalan Siram for the cremation.

Puvaneswary, 47, died Thursday (Aug 15) when the Range Rover that the couple and their three sons were travelling in was involved in an accident on the North-South Expressway.

Their eldest son Veerasamy, 21, said he was finding it hard to accept that his mother was no longer with them.

"My dad, brothers and I loved her very much. We are a close-knit family. We will miss her a great deal. She had the most beautiful smile.

"Mum worked very hard with dad, uncle, aunty and our other relatives.

"She sacrificed a lot of time on the family-run business, including the Sri Ananda Sakthi Silk House, which was close to her heart," he said Saturday (Aug 17).

Penang Deputy Chief Minister II Dr P. Ramasamy, who was at the funeral with many other dignitaries, extended his condolences to Harikrishnan on the loss of his wife.

In the tragedy at around 3am Thursday, the family were on their way back to Penang from Ipoh when the car skidded off the road at KM200.9 on the North-South Expressway.

Puvaneswary, seated in the back seat, died on the spot, while Harikrishnan, 51, sustained injuries to his face and broke his right finger.

Their other sons Mehgulan and Navinsamy sustained injuries to their knees and hands.

As a mark of respect, the Ananda Bahwan chain of restaurants nationwide were closed for business for three days, from Thursday to Saturday. 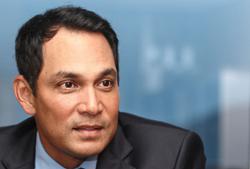 Isaac hopes to hand over report on Finas achievements