KOTA KINABALU: Authorities succeeded in nabbing a boat with six Vietnamese crew, posing as a local vessel off Kudat district waters on Monday.

According to the Malaysian Maritime Enforcement Agency (MMEA) Kudat corporate communication unit, over 300kg of sea cucumbers were found in the boat with a local registration number but with the foreign fishermen on board.

"The boat was apprehended around 4.40pm on July 29 about 1.8 nautical miles northeast from Pulau Mandi Darah, Pitas in Kudat waters. 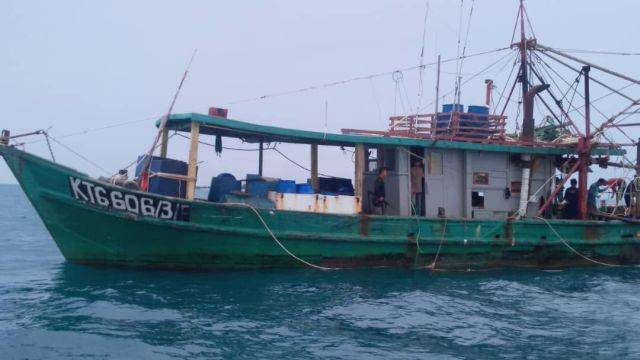 Preliminary inspections of the boat's document showed it was locally listed but the specification of the particular boat were in contrast to the details on the document.

"Furthermore, a check on the fishermen's passports found no record of movements in and out of Malaysia.

"This created more doubt, so we apprehended them and the boat for further investigations, " he added.

However, he said the process of bringing the boat to the Kudat mainland was difficult due to the distance, as well as strong winds and currents.

"The case is being investigated according to Fisheries Act 1985 and Immigration Act 1959/63.

"The total seizure is estimated at RM550, 000 including vessel, its equipments and the sea cucumbers.

He said boats like this were no longer allowed as the method by these "foreign thieves" was forbidden due to the long-term impact to the ecosystem and marine biodiversity, destroying corals there.