PETALING JAYA: The Malayan tiger found roaming in a village in Dungun, Terengganu has died, said the Department of Wildlife and National Parks (Perhilitan).

The five-year-old tiger nicknamed Awang Besol was confirmed dead at the National Wildlife Rescue Centre (NWRC) in Sungkai, Perak, at about 5.30am yesterday.

This was despite the intensive efforts to treat and save the tiger, said Perhilitan, which added that Awang Besol was infected by canine distemper, a viral disease which infects domesticated animals such as dogs as well as wildlife, including tigers.

“If the disease infects a tiger, it will display behaviour such as being unafraid of humans, and the possibility of it healing is very small,” Perhilitan said in a statement.

It added that it did not rule out the possibility that the virus was spread by other wild animals around Kampung Besol Lama in Dungun, where the tiger was found roaming. 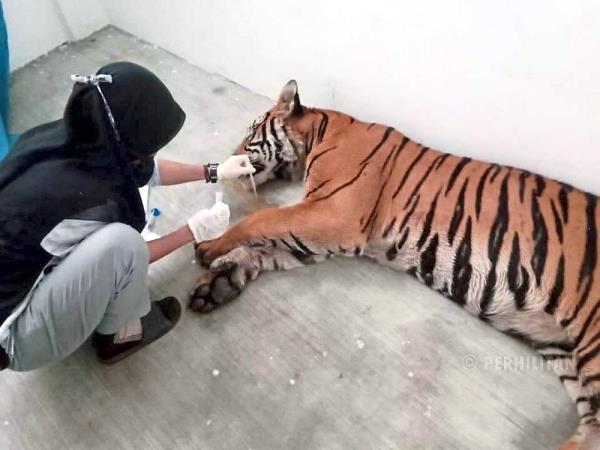 No longer with us: The Malayan tiger known as “Awang Besul” that was found roaming in a village in Dungun has died at about 5.30am yesterday.

Tests on a blood sample from the tiger confirmed presence of the canine distemper virus.

Awang Besol, estimated to weigh about 130kg, was caught at about 3.30pm on Friday after being tranquilised.

Videos of the tiger roaming in the village were widely circulated on social media and messaging applications recently.

Perhilitan said it monitored the tiger from July 20-23 and found that it displayed clinical signs of distemper such as non-aggressiveness, walking in circles, as well as having fits and nasal discharge.

Perhilitan said in the interest of public safety, it was monitoring the area around the village, and had placed tiger traps.

It also urged the public to call 1800-885-151 should there be tiger sightings in the vicinity.