Who is on whose side?

PETALING JAYA: The feud between the two major factions in PKR has spilled out in the open but who is on whose side is still open to debate.

About two hours after Datuk Seri Anwar Ibrahim got told off by his own central committee members and MPs for calling on Datuk Seri Azmin Ali to resign if it was proven that he was one of the men in a viral sex video, Anwar said it had all been a misunderstanding.

During the press conference in the Parliament lobby, two MPs who had earlier signed a statement against Anwar were seen standing beside him while PKR vice-president Dr Xavier Jayakumar, who told reporters he had been a signatory, also called for calm.

The statement released yesterday morning, was signed by 28 people, including 23 PKR central committee members and a number of MPs.

It said party president Anwar should not have called for Azmin’s resignation and “to stop making such divisive statements”. 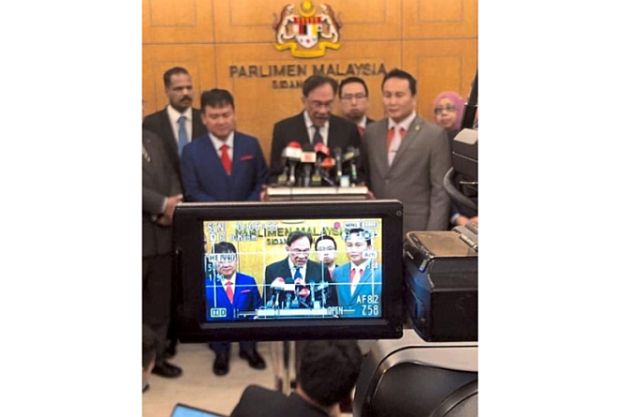 The plot thickens: Anwar addressing the audience during a press conference at Parliament.

The leaders said Anwar’s statement was “inappropriate” but was also based on “speculative assertions”.

“He should be focusing on the key issue here, which is that there is an organised attempt to use gutter politics to bring down political leaders.

“He should be more concerned about the criminal offences committed by this group who have systematically and widely distributed a video displaying sexual acts,” the statement read.

Among those who signed the statement were party vice-presidents Zuraida Kamaruddin, Tian Chua, Ali Biju and Dr Xavier.

Also seen in the signatories were Wanita chief Haniza Talha and her deputy Dr Daroyah Alwi.

The statements said as Azmin had denied it was him in the video, and Anwar – as party president – should have stood by his deputy “in the interest of the party unity” and not undermine him using speculation.

The statement added that Anwar should also remember that since Reformasi, the party had defended him against identical tactics using sex videos and other means of gutter politics – even when the police chief in 2011 declared a sex video implicating him as genuine.

“He should remember Azmin has defended him and his family for more than 20 years against the same type of gutter politics.

“We reiterate that the party must stand firm against the kind of gutter politics used against Azmin. We will stand with Azmin and any other leaders who are attacked using such unethical methods,” it said.

The signatories also urged Anwar to stop making divisive statements, adding that he should work instead to unite the party in the interest of its members, Pakatan Harapan and the country.

Responding to this, Anwar downplayed the public tiff between him and his deputy while dismissing the latter as a threat concerning the prime minister’s post.

Anwar, who is also Port Dickson MP, claimed that he has the support of adequate number of lawmakers in his bid to become the next premier.

“The MPs are with me. The Pakatan Harapan made their categorical stand, there is no change in that.

“The Prime Minister (Tun Dr Mahathir Mohamad) and I have weekly meetings.

“I have the numbers, I got the support of Pakatan and the PM so it’s not for me or Azmin to indicate otherwise,” he told reporters.

Anwar also dismissed the war of words between him and Azmin, saying that the Economic Affairs Minister probably did not fully comprehend his remarks made in the media about the latter resigning.

“He is undergoing a very difficult period and I would certainly not respond to a spontaneous outburst.

“Again, Azmin (probably) said that without reading the full statement (that I made).

“He thought that I came to Parliament and said that he should resign but that is not true.

“So I don’t feel upset (about Azmin’s outburst) but I thought he should have read the full text,” Anwar said.

He also reiterated his stand that the party rejects gutter politics and sympathised with Azmin and his family during such tough times.

Anwar said he had contacted Azmin recently but did not elaborate on what was discussed.

Ali Anak Biju (Saratok) and Willie Mongin (Puncak Borneo) who had signed a joint statement in support of Azmin were also present during the press conference.

Anwar said that he took the criticism by his fellow party colleagues in stride and as a reminder to keep the party united.

“I think I need to be magnanimous enough to accept the fact that I have to lead a coherent and united party.

“According to my colleagues and friends, I should have just said wait for the police report, I take that into consideration,” Anwar said.

I have other things to think about, says Dr M

‘Farhash had no food for 24 hours’