‘Carry documents with you’

PETALING JAYA: Foreign students must have either their passports or iKad with them or risk being detain­ed, says Immigration Department director-general Datuk Khairul Dzaimee Daud (pic).

Photos of these documents will not be accepted, he said in response to complaints by foreign students of being victimised by authorities.

“The iKad is a legal document which has been gazetted.

“All enforcement agencies including the police have been informed of this,” he said, adding that legitimate foreign students, who have been detained despite showing their iKad, should report the matter to the department.

Khairul Dzaimee also dispelled claims that those detained were treated like “animals” without pro­per food and having to put up in dirty conditions.

Allegations of extortion would be investigated as well.

“We will take action if the allegation is true. There will be no compromise on inte­grity issues,” he told The Star.

Every officer would carry an Immigration ID and students have the right to ask to see it, he said.

He said depending on the location and target of the operation, Immi­­gration officers may not be in uniform.

A scholar funded by the Botswa­na government, she arrived in Ma­­laysia on June 28 and was roun­ded up in an operation on July 5.

Her passport was with the Edu­ca­tion Malaysia Global Services (EMGS), a wholly-owned company of the Education Ministry, for visa endorsement and her iKad had yet to be issued.

“She was at a bus stop at about 7pm when a woman in plainclothes asked for her passport.

“Because she couldn’t produce the passport, she was taken away in a truck with many others in it. The truck went to numerous locations before arriving at the police station in KL two hours later.

“She was traumatised throughout this journey. No one told her what was going on.”

He said student was only released about seven hours later despite her university handing over all the relevant documents.

Mapcu is hoping to meet with enforcement authorities to address the issue of genuine foreign students being unreasonably harassed by enforcement, he said.

“What happens when the passport has been sent for the visa to be stamped?

“This can take up to two weeks and what if the iKad has not been issued yet? Even at this stage after a week, her passport has still not been returned to her after the visa endorsement.

“All the students have is a photocopy of their passport and receipt from EMGS stating the passport has been submitted to them,” he said.

The question remains as to why this could not be verified on the spot as the authorities have full access to the EMGS database, which clearly outlines the stage of the application with exact dates, he said.

“Any smartphone can be used to access this information through the passport number and the nationality.” 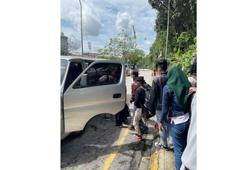