GEORGE TOWN: Two non-governmental organisations have questioned how the Penang South Reclamation (PSR) project could have obtained the Environmental Impact Assessment (EIA) approval when several issues raised by them have not been addressed.

In a joint statement, Consumers Association of Penang (CAP) acting president Mohideen Abdul Kadir and Sahabat Alam Malaysia (SAM) president Meenakshi Raman said the Department of Environment (DoE) has not addressed the fundamental issues on the reclamation, and called on the EIA to be made public.“Among the issues are the population projections which are not sound, the serious impact on the marine resources and the incomplete assessment of the sand-mining impact.

“We are alarmed that our comments and those of other civil society groups, including the public, have been pushed aside by the DoE,” the statement said.

It further claimed that about 1,500 fishermen’s livelihood could be affected by the project and the landing and nesting ground of the Oliver Ridley turtles could be totally wiped out.

On Friday, the state government announced that the PSR had obtained the EIA approval with 72 conditions needed to be fulfilled before the project could begin.

In a response to the statement, State Environment Committee chairman Phee Boon Poh said the NGOs should not be critical all the time as the state had never neglected its duty to safeguard the environment in any of its projects.

“We respect the views of the civil society and NGOs, and have always taken their advice into consideration,” he said yesterday.

State Works Committee chairman Zairil Khir Johari said Chief Minister Chow Kon Yeow had made it very clear that all the 72 conditions would be fulfilled even if the project now was going to cost more for the developers. 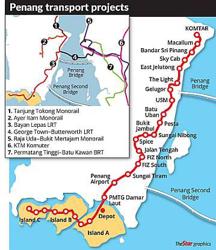