GEORGE TOWN: Some like having the power in their hands. Others did not have a clue what was going on.

Students were aware of the responsibility that comes with vo­­ting, and some felt they were ready to decide.

But others questioned if they were mature enough to vote at 18, especially those who are not keeping abreast with current affairs.

“I am slightly aware of the political situation in the country, but not aware enough to make an informed decision to vote.

“My family members voted last year but we do not discuss politics at home.

“I don’t think bringing the voting age down to 18 is a good idea. As a teenager, you will probably be influenced by your parents on whom to vote for.

“It will not be your own decision,” said Ooi, an intern at Penang Global Tourism who is doing her degree in Public Relations.

Opposing views: (From left) Ooi, ariena, Gautham and Joseph have different opinions on the proposal to lower the voting age.

Event Management student Ber­nice Oh, 22, said many people were not aware of politics even at 21.

“I think it is important to know who you are voting into power, and not just put a cross on the ballot papers for the sake of it.

“When you are young, you do not really know much,” she said.

“It is only what I see on the television or social media that I grasp and understand. But I also know social media is not always the best source of correct information.

“I think it’s better to stick to vo­­ting at 21 as you are considered an adult then,” said the mass communication student.

But some students felt that lowering the voting age to 18 is the right decision.

Student S. Gautham, 18, said he has always been aware of the political situation in the country as it was discussed at home.

“My parents talk about politics at home and I feel I am old enough to be able to make a decision to vote.

“We have to understand what is going on and use our own judgement, not just what is on social media,” said Gautham who proposed that teens take an online test on the country and political parties before being allowed to register as voters.

Student Jonathan Joseph, 18, said he wished he was part of the political change last year.

“Politics is something we should be concerned about, the younger the better. These days we are exposed to a lot more information and have access to multiple versions of news.

“Even if it’s just three years earlier than the current voting age, we do have our own opinions,” said Joseph.In Melaka, teenagers were also as divided on being eligible to vote at 18.

Student Nurintan Suraya Rahmat felt that 18 is too young an age to be thinking about politics as she wants to concentrate on her studies.

“To me, 21 is the appropriate legal age to vote,” said Nurintan who prefers that the government focuses on strengthening multiracial ties and helping students with financial aid for their studies.

Ahmad Hakeemy, 18, said his peers are more interested in fashion, e-sports or football and certainly not politics.

He suggested that political parties open up their membership to 18-­­­­­­­­­year-olds and help them gain insight into the political landscape before they reach voting age.

Vishwadhik Gopal, 18, however, is all for lowering the voting age, saying that young Malaysian also want to have a say in electing the government.

“There will be those among us who will one day take over as poli­tical and business leaders,” said the student from Kuala Lumpur.

Student Nazza Hamyd, 23, is from Maldives where the legal voting age is 18, and said teenagers should have a say as decisions made by the elected government affect everyone. “When I voted for the first time, we managed to elect our first democratic leader.

“It’s incredibly important that the teenagers get to vote as the older generation tend to stick to what they know and dare not venture out.“I feel teenagers and youths nowadays are very much involved in what is going on in their countries when it comes to political issues. 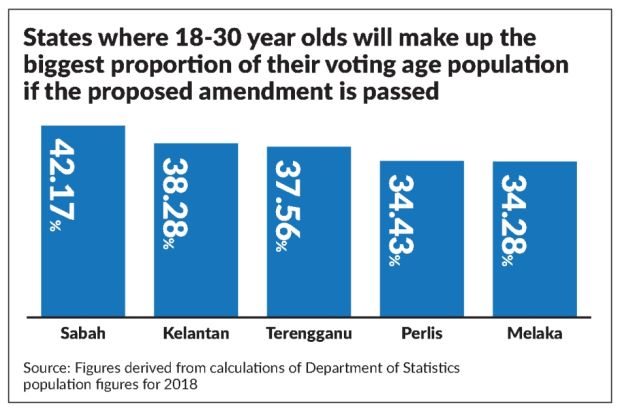 Malaysia among few countries with voting age of 19 and above No age restrictions to Muzium Negara, only 100 visitors allowed in per session Explainer: Fraud is rare in U.S. mail-in voting. Here are the methods that prevent it