Bachok school rakes in RM15,000 in one year thanks to mushroom-growing project 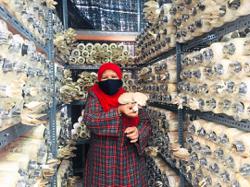 BACHOK (Bernama): Sekolah Kebangsaan Bakong here has been earning additional income of more than RM15,000 for the past one year via a mushroom cultivation project implemented by the schools’ parents’ toolkit (Sarana Ibu Bapa) since May 2018.

"We also earned an additional net profit of RM1,800 for split gill mushrooms cultivation for a two-month period (April to May) this year," he said.

Azman said being a pioneer school in mushroom cultivation project in the state, the school aimed at generating additional income via the activity.

"Currently, we have 10,000 bags of grey oyster mushrooms and 500 bags of split gill mushrooms,” he told reporters at the school’s mushrooms cultivation project site Monday (July 1).

Azman said an old canteen building was renovated and turned into a shelter to house the mushroom spawning bags, with all the nutrients and mushroom spores pre-packaged.

"The project was mooted by the school’s former headmaster Fadhil Hassan who helped finding activities to generate additional income for the school as it is located in a rural area.

"Through the discussions held at the PTA meeting, we reached a consensus to start the project with 5,000 bags of grey oyster mushrooms that we sourced from Thailand and Indonesia,” he said.

Azman said there were an additional 5,000 bags of grey oyster mushrooms and 500 bags of split gill mushrooms under the administration of the school’s new headmaster Amran Zakaria.

"On average, we sell about 15kg of grey oyster mushrooms daily at RM10 per kg to wholesalers at Pasar Jelawat, while the split gill mushrooms are priced at RM40 per kg.

"The project also received cooperation from parents to ensure that the mushrooms are in good condition  by carrying out constant monitoring, particularly the temperature and humidity in the shelter twice a day,” he said. - Bernama