Wan Azizah: Seven out of 10 dumped babies end up dead

And with the number of baby dumping cases growing every year, Deputy Prime Minister Datuk Seri Dr Wan Azizah Wan Ismail is calling for the issue to be dealt with urgency.

“The dumping of newborns is a serious issue that needs to be addressed immediately. Police statistics show there were 577 baby dumping cases from 2014 to 2018.

“Among the causes of baby dum­ping is unwanted and teenage pregnancies.

“The ministry is taking proactive steps by formulating advocacy and preventive strategies, as well as organising public awareness programmes specifically for teenagers on their reproductive health,” she said.

“The ministry is also implementing ‘locality mapping’ and ‘strategic intervention’ at areas identified by police as ‘hot-spots’ for baby dumping,” said Dr Wan Azizah, who is also Women, Family and Commu­nity Develop­ment Minister.

She was speaking at the launch of the ministry’s anti-baby dumping campaign in collaboration with the North-South Expressway (Plus), at the Dengkil rest and service (R&R) area here. 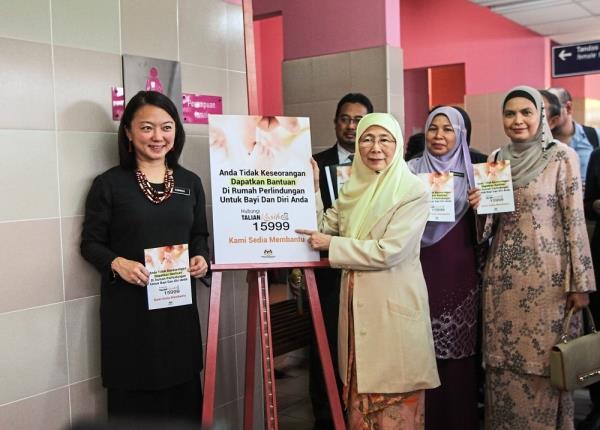 You don’t have to be alone: Dr Wan Azizah and Yeoh (left) launching the campaign against baby dumping at the Dengkil R&R in Sepang.

As part of the campaign, the ministry has put up awareness posters on both men’s and women’s toilet cubicles at 22 Plus R&Rs nationwide.

The posters read “Anda tidak keseorangan. Dapatkan bantuan di rumah perlindungan untuk bayi dan diri anda. Hubungi Talian Kasih 15999. Kami Sedia Membantu.” (You are not alone. Seek help at our shelters for you and your baby. Call the Talian Kasih hotline at 15999. We are ready to help.”

Dr Wan Azizah said teenage girls and women who face unplanned pregnancies should not worry about seeking help from the ministry.

“Our ministry has counsellors with experience in handling these cases and are ever-willing to help and give protection to you and your baby.

“The Social Welfare Department has shelters for children and women who are pregnant out of wedlock.

“Seek help immediately and do not make rash decisions that can endanger your life and the baby’s,” said Dr Wan Azizah.

She also reminded that baby dumping is an offence under the Penal Code.

Yeoh also said those who want to give up their babies should consider handing over their child to the OrphanCare facilities or baby hatches that are available around the country.

The OrphanCare Foundation is a non-profit organisation that owns several baby hatches in the country and facilitates the adoption of institutionalised children and unplanned babies.