By MARTIN CARVALHO and Allison Lai

PETALING JAYA: A recent survey by an international survey agency revealed that almost a quarter of 1,027 Malaysians polled experienced suicidal thoughts, and it was especially prevalent among youths.

Even more alarming is that 26% of those surveyed by YouGov admitted to self-harm with the data showing that one in 10 young Malaysians indulged in self-harm frequently.

The latest survey by YouGov found that while two in 10 respondents rarely had suicidal thoughts, one in 20 had them frequently.

The survey also revealed that 26% of those surveyed had engaged in self-harm with a third of them being youths.

“Among younger Malaysians, data shows that almost one in 10 self-harm frequently,” YouGov said.

The poll also noted that one in 10 respondents had experienced some form of mental health issues in their lifetime.

“Younger Malaysians are five times more likely to state that they have had mental health issues than older Malaysians (11% vs 2%),” the statement added. 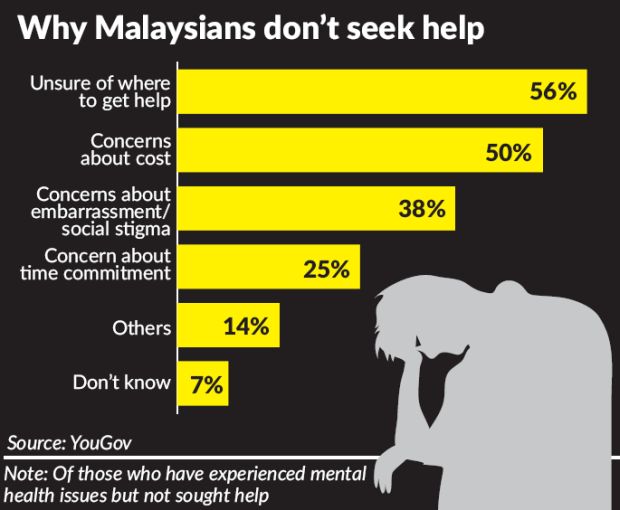 The survey revealed that depression (73%) and anxiety (53%) were the most commonly experienced mental health issues.

“However, only two in five (43%) of those with mental health issues go on to seek professional help for it.

The survey found that the main barriers in seeking professional help were respondents being unsure of where to get help (56%), cost (50%), embarrassment or social stigma (38%) and concerns on time commitment (25%).

YouGov Omnibus Asia-Pacific chief Jake Gammon said many people with mental health issues suffered in silence and this was indicated by the survey.

“We hope this survey sheds light on the topic of mental health, and how it affects people differently,” he added.

Under Section 309 of the Penal Code, a person could be jailed a year, fined or both for attempting suicide.

For more information, they can email sam@befrienders.org.my.

Ex-victims: Vital to seek help and reach out