KOTA KINABALU: A coalition of conservationists and community-based entities have called for mangrove-preservation measures in future development along Sabah's coast.

Coalition 3H, which is made of nine organisations, recommended that any tourism development and associated roads planned must consider future effects of climate change and preserve the natural coastal defence system that mangrove provides.

Coalition 3H said that despite their immense value, mangrove forests are in constant danger of being damaged and disrupted by infrastructure like roads, hotels and housing developments, shrimp farms and fish farms, and to a lesser extent from being cut for firewood, charcoal and posts, the coalition said in a statement.

WWF-Malaysia Sabah conservation head Dr Robecca Jumin said Sabah has the largest mangrove area of any state in Malaysia with over 232,000 hectares, mainly along Sabah's east and southeast coast.

"However some critical areas, for example on Sabah's west coast, remain unprotected.

"While Sabah should be proud to host two wetlands recognised as being of global importance and designated as Ramsar sites – the Lower Kinabatangan-Segama Wetlands, and Kota Kinabalu

Wetlands right here in the capital, other parts of Sabah's mangrove areas are decreasing or being degraded," she said in the press release.

She added that mangrove areas act as a 'bio-shield' by stabilising shorelines and reducing the effect of storms.

As such, coastlines are prone to storm surges and coastal erosion where mangrove forests have been removed or the sea has been reclaimed.

"Manmade substitutes to mangrove, such as reinforced concrete embankments, as a measure of erosion control would be extremely costly," she added.

She said that while they can be tough, mangroves also dependent on freshwater and die when deprived of freshwater, such as when road development reduces the flow of water from rivers.

The protection of mangrove areas are also important to maintain the habitats of wildlife such as the endangered proboscis monkeys.

"The Sabah Proboscis Monkey Action Plan (2019-2028) explicitly states the halting of loss and degradation of habitat, as one of its priority actions to protect this iconic species" pointed out Dr Goossens from Danau Girang Field Centre.

Mangrove forests are also home to birds, crabs, prawns, mudskippers and many other types of fish, as well as Sabah's famed fireflies and the increasingly rare silver leaf monkey. 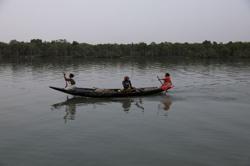