Around the world on a bicycle

Good job: Muhammad Amir (middle) receiving a mock cheque from Aminolhuda. Looking on is Mohd Khuzzan (second right) and others.

BATU PAHAT: Always chase your dream, even if you have to quit your full-time job as a lawyer to cycle around the world.

And that is exactly what Mu­­ham­­mad Amir Arsad did to pursue his lifelong dream of living an adventurous life by experiencing the different cultures in other parts of the globe.

The former lawyer said that he had always wondered what it is like to live out of his comfort zone and in other people’s shoes.

The 29-year-old said he started by saving his salary for two years before quitting in De­­cem­­­ber 2017.

He then flew to Europe in January last year as a backpacker and began his homeward journey riding a bicycle in July 2018.

“It has always been my dream to travel on land exploring the European continents and all the way through South-East Asia.

“I spent about US$500 (RM2,081) to buy a bicycle and the necessary equipment before starting my ride back,” he said at his house in Kampung Parit Yaani Tengah.He arrived home on June 3 and was welcomed by state Education, Human Resource, Science and Technology Committee chairman, Aminolhuda Hassan and state Health, Culture, and Heri­tage committee chairman Mohd Khuzzan Abu Bakar.

Muhammad Amir said his ex­­periences had taught him to appreciate living in a beautiful and peaceful country.

“We are actually very blessed but the majority of us don’t know that because I have seen and felt the suffering of the people from warring countries such as Iran and Kazakhstan,” he said.

“There are many people out there who lived their life without any aid or facility, even from the government. So we should be grateful for what we have.”

Muhammad Amir said his time in Kazakh­stan and China were the most memorable.

“The people of Kazakhstan was my life saviour, I was provided with food, shelter, and money for me to continue my travel.

“And China was probably the toughest due to its detailed immigration clearance and approval,” he said, adding that he crossed 23 countries during his 16,000km journey.

He said he could only travel about 90km a day and 40km during the winter due to the short daylight hours.

Aminolhuda said that Muham­mad Amir’s travel experience could be shared with youths.

“It’s an inspiring story ... not (only) to travel the world but to give it (your) all just to achieve your dream.

“I have informed Muhammad Amir that the Education Depart­ment will call him up to give motivational talks to students about his experiences,” he said.

Aminolhuda also gave RM15,000 to Muhammad Amir as a token of appreciation from the state government for his achievement. 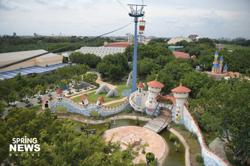