‘I only wanted to save the bear’

By AZLINA MAZLI and CLARISSA CHUNG

PETALING JAYA: Singer Zarith Sofia Yasin, who revealed herself to be the person who had kept a sun bear cub in her condominium in Desa Pandan, Kuala Lumpur, says she had no intention of keeping it as a pet.

The former contestant on the tele­vision programme Rockanova claimed that she had found the bear in a weakened state near Bukit Am­­pang about two weeks ago.

She said she would have sent it to the zoo once it recovered.

“My intention was to wait until he has recovered, then I will send him to the zoo. I only wanted to save the bear, I had no intention of exploiting him.

“I was worried about sending him to the zoo (while it was ill) because the animals there look skinny,” she told Star Media Group’s Bahasa Malaysia news portal mStar Online.Zarith added that she had taken good care of the bear, which she had named Bruno, by feeding it good food.

“It was true that I went home for Hari Raya, but I didn’t let him starve, I left him some food.

“If Bruno could talk, it would surely say the food I gave was delicious. He ate chocolate,” said the 27-year-old whose nickname is Pia.

She said she also let the bear out of its cage to roam about.

“I did not leave him in the cage because I did not want him to sit there for too long – that would have been even more cruel. Perhaps some neighbours passed by and saw the bear (roaming) and they made noise. So the bear may have panicked and roared,” she said.

Zarith dismissed claims by netizens that she is running a business selling protected wildlife.

“I run a business in the day and at night I sing ... when would I have the time to sell animals?” she said.

She said she was ready to face the legal consequences of her action, adding that she would accept it if she is found guilty.

Zarith had also reportedly told Kosmo! Ahad that she had initially mistaken the bear for a dog.

Authorities, meanwhile, said the bear, which was rescued on Friday, had been sent to a wildlife rescue centre.

An official from the Wildlife and National Parks Department (Perhili­tan) confirmed that the cub is now in safe hands.

“The bear has been sent to the National Wildlife Rescue Centre in Sungkai, Perak, for quarantine and treatment purposes,” he said.

He said the cub, aged about five to seven months, is in good health as he was not found to have sustained any injuries.

He added, however, that the department was undecided if the cub should be released back into the wild because of its young age.

“Additionally, the sun bear cub also has to be quarantined first and the case is still in the investigative stage,” he said.

“For now, the department is in the process of recording statements for prosecution purposes,” he said, without naming suspects.

The case is being investigated under the Wildlife Conservation Act 2010. Perhilitan director-general Datuk Abdul Kadir Abu Hashim, however, reportedly said the authorities believed that the sun bear was purchased from a syndicate. 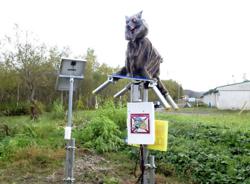