Selangor Criminal Investigation Department chief Senior Assistant Commissioner Fadzil Ahmat said the eight men were aged between 22 and 57 were arrested at 2.45 pm on Wednesday (May 15) while the two women aged 19 and 46  were nabbed on Friday (May 17) around Gombak.

He said all the suspects were arrested following a police report received on May 13 that the MPS officer's house in Rawang, Selangor was splashed with red paint and that had resulted in damage to two vehicles belonging to the victim.

“A similar incident took place on April 28 when the suspects set off firecrackers,  which were left in a red paint barrel filled with nails, iron fillings and pieces of paper.

“The initial confession from the suspects was that they were hired to attack the victim's house because the MPS took stern action to address the dumping problem at an illegal landfill in Kampung Sungai Tua Batu Caves, Selangor,” he said when contacted by Bernama on Saturday (May 18).

The 47-year-old  nicknamed Man Puchong is being sought to facilitate investigations.

According to him, all the suspects do not have previous criminal records and have been remanded to assist with  investigations.

Meanwhile, MPS Enforcement and Security Department director Norhahyati Ahmad, said when met at her house that the threats received by her will not dampen her spirit in discharging her duties after two months on the job.

She said the two police reports had been lodged at the Rawang Police Station and that she assumed the threats received were serious with certain motives, but did not know who was behind it.

“I have never received any threats before this, therefore, what has happened has made me scared. It also affects my neighbours who are worried over their safety as well,” she said.

Following the incident, the security control at her residence has been enhanced with the fixing of four closed-circuit television (CCTV) cameras, as well as patrols from the  police and MPS enforcement officers. - Bernama 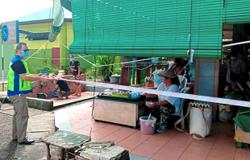