SANDAKAN: DAP's Vivian Wong has emerged victorious in the Sandakan by-election, picking up a 11,521-majority win in taking the seat that her father held until his passing in March.

In the process, she helped to snap the run of three consecutive by-election losses suffered by Pakatan Harapan in Cameron Highlands, Semenyih and Rantau.

"I just tried my best. So, I’m very surprised and thankful for the support of Sandakan voters," Wong said.

"I want to thank my father’s voters for being able to trust in his daughter, that I can do as good a job as my father,” she added.

In a statement, PBS congratulated Vivian for retaining the DAP seat.

“The voters have chosen and we respect their decision.

“At the outset, PBS recognised itself as the political underdog here, given the electoral result for the constituency in GE14,” said party president Datuk Seri Dr Maximus Ongkili.

“PBS put up a good fight, but in the end, we could not overcome the might we were facing," he added.

Wong is the youngest daughter of the late Stephen Wong, whose death on March 28 triggered the by-election.

The elder Wong was Sandakan MP in 2013 after beating incumbent Datuk Liew Vui Keong of the Liberal Democratic Party (LDP) with a 1,088 majority in the 13th General Election in 2013.

In GE14, he kept his seat after beating newcomer Lim Ming Hoo of LDP with a 10,098 majority and served as a government MP after Barisan Nasional lost the election.

A total of 39,684 constituents were eligible to cast their votes today for the by-election, from a total 40,131 voters registered under the Sandakan parliamentary constituency. The remainder include 177 postal votes and 270 early voters. 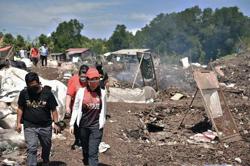