KOTA KINABALU: An 18-year-old youth was arrested by police in Taiping for allegedly threatening to circulate semi-naked pictures of a 15-year-old girl through Instagram.

Beaufort police chief Deputy Supt Azmir Abd Razak said the suspect, using an account name “Fordhaneem”, had befriended the Form Four student through Instagram last month by claiming that he was an agent scouting for models.

DSP Azmir said the girl sent pictures of herself after the suspect convinced her that it was to gauge her clothing size. She even filled up a form for the “modelling job”.

DSP Azmir said the girl sent semi-nude photos of herself but the suspect insisted he needed nude pictures.

The student from Sabah’s southwestern Beaufort, however, became suspicious when the suspect continued to pressure her for the naked photos. She stopped communicating with him on Instagram.

Subsequently, she received a WhatsApp message from a user named “Harith” who claimed that he had received her semi-nude photos from “Fordhaneem.”

DSP Azmir said Harith demanded RM500 from the girl to stop her pictures from being spread on social media.

DSP Azmir said the girl suspected that both Harith and Fordhaneem were the same person and immediately lodged a report on April 5.

Investigations led to the arrest of the suspect in Taiping by Perak police yesterday. He has been remanded for six days.

Police are also looking into whether the suspect was involved in similar blackmails of victims in other states.

The alleged chats between the student from Kuala Penyu and the suspect are believed to have taken place between March 10 and March 31. Police are carrying out the investigations under Sexual Offences Against Children Act 2017.

Police nab one drug suspect after 18km chase, another flees by jumping into drain 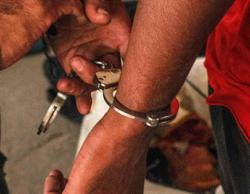