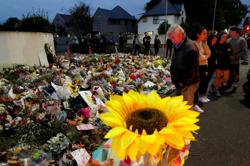 “The Christian Federation of Malaysia condemns the senseless and deadly  acts of violence in which a gunman reportedly killed 49 worshippers and injured dozens of peaceful people who were at their Friday prayers at the Al Noor Mosque and the Linwood Islamic Centre in Christchurch, New Zealand.

“CFM denounces all forms of hate crimes and violence. The loss of innocent lives does not build lasting peace in the world,” said Archbishop Leow, who is also CFM chairman.

He also urged fellow Malaysians to deeply cherish unity, peace and harmony within the nation and reminded Malaysians to always work towards ensuring mutual respect to everyone regardless of religion.

“Today, we urge all fellow Malaysians to take this timely opportunity to cherish deeply the unity, peace, and harmony in our nation and to always tirelessly work to ensure sincere mutual respect for all religions and peoples in our beloved nation.

“Hate speeches stirring up animosity have no place here or elsewhere in our world.”

“We extend our deepest condolences to the families of the victims and urge churches in Malaysia to pray for those who are grieving their loss,” Archbishop Leow said.

The attacks on the two mosques in Christchurch on Friday (March 15) saw 49 people shot dead and more than 40 people injured.

Foreign Minister Datuk Saifuddin Abdullah also said that the three injured Malaysian victims of the attacks were now in stable condition and would be undergoing surgery to treat their wounds.