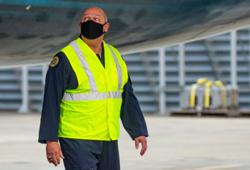 PETALING JAYA: The Civil Avia­tion Authority of Malaysia (CAAM) has suspended all Boeing 737 MAX 8 flights from landing in and taking off from Malaysia airports following two fatal accidents involving the plane model in less than five months.

In a press statement, he said the suspension would be imposed until further notice.

As of yesterday, there were no 737 MAX 8 flights that landed in or took off from Kuala Lumpur International Airport (KLIA).

The last of that aircraft, one of Boeing’s flagship models, landed in Sepang airport on Sunday. It belongs to China Southern Airlines.

According to flightrader24.com, the plane arrived at 12.35pm and took off on the return leg to Guangzhou at 1.35pm.

Aside from China Southern Airlines, the other airlines with 737 MAX 8 in their fleet that ply KLIA regularly are the Singaporean-owned Silkair and Indonesian-operated Lion Air.

The last time a Silkair 737 MAX 8 flew in to KLIA was last Saturday and back to the city-state.

None of Lion Air’s 737 MAX 8 aircraft have landed in KLIA since last Tuesday.

It is learnt that officials from the Transport Ministry and CAAM met at the latter’s office yesterday afternoon to discuss the issue.

Although all the three airlines have decided to ground their 737 MAX 8, the officials at the meeting felt that there should be an official stand on the matter as many other civil aviation authorities around the globe have barred the Boeing model at their airports, said a source.

CAAM will monitor the flights from these three carriers to KLIA should they decide to reintroduce the planes in their schedule, the source added.

“CAAM and the ministry will review the decision to allow these planes to fly to Malaysia, but it will be based on the relevant safety information from the US Federal Aviation Administration and other aviation regulators, as well as Boeing,” it said.

Meanwhile, none of the Malaysian-owned airline operators have 737 MAX 8 in their fleet.

Civil aviation bodies around the globe, including Singapore, have taken similar steps after the Ethiopian Airlines crash on Sunday, killing all 157 people on board.

The brand new MAX 8 plane plunged just six minutes after it took off from Addis Ababa for Nairobi, Kenya.

In October, a Lion Air flight crashed into the sea off Jakarta shortly after take-off, killing 189 people. It was also a new 737 MAX 8.

The US Federal Aviation Admi­nistration released a “continued airworthiness notification” for the MAX on Monday evening. However, it later issued a notice to international carriers saying that it would mandate forthcoming “design changes” to the aircraft from Boeing by April.