Anwar: “Bossku” not a threat to Pakatan in Semenyih, people aware of the scandals

SEMENYIH: Resounding shouts of "Bossku" are not a threat to Pakatan Harapan's chances to retain the Semenyih state seat as people there are aware of the many scandals surrounding former premier Datuk Seri Najib Tun Razak, says Datuk Seri Anwar Ibrahim.

The PKR president said the grand scale of the 1MDB scandal would instead counter Najib's newfound popularity.

"1MDB is a huge issue that the whole world knows. Whether I am in New York or Toronto to meet with investors, even they are shocked at how such robbery and abuse of power could happen," he said.

At a Chap Goh Meh celebration in Kampung Baru Semenyih Saturday (Feb 23), Anwar said he knows that some people may not be happy after putting high hopes on Pakatan.

"I understand the grouses but we cannot expect to solve problems such as high cost of living immediately.

"We know we have weaknesses but rest assured the government under Tun Dr Mahathir Mohamad is finding ways to solve this. We just need time," he said. 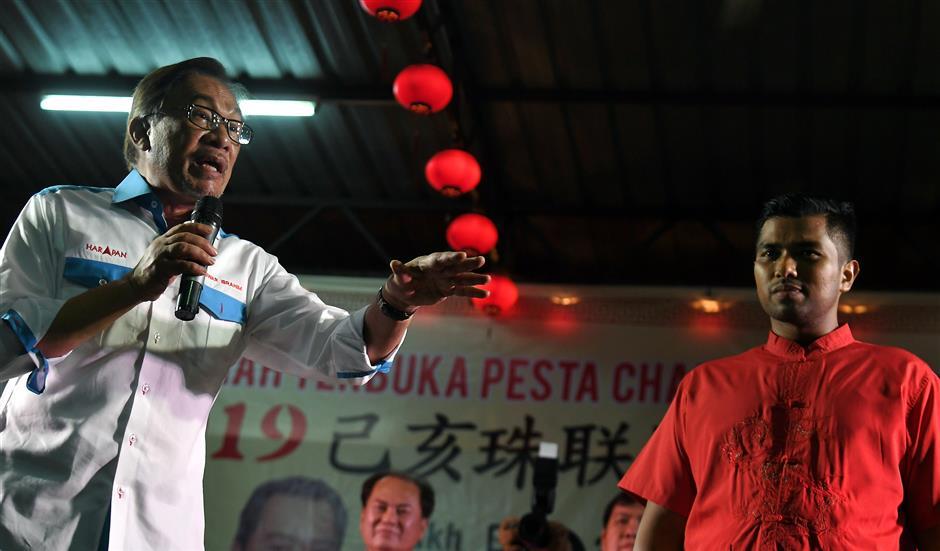 Anwar has also put his support behind Pakatan candidate Muhammad Aiman Zainali, who described as a capable young professional.

He brushed off talk that Pakatan component parties, including PKR, are not doing enough to support Aiman's campaign in Semenyih.

"The machinery is led by Menteri Besar Amirudin Shari and the whole PKR machinery is here so I don't understand such talk.

"I have even instructed Amirudin to send me a progress report every three days. And even (Datuk Seri Dr) Wan Azizah (Wan Ismail) had a whole day programme here today," he said Saturday.

When asked if he himself would come to Semenyih again, Anwar replied "Insyaallah (God willing)."

Aiman will face three others in a four-cornered battle for the Semenyih state seat, left vacant following the death of its assemblyman Bakhtiar Mohd Nor on Jan 11.