KUALA LUMPUR (Bernama): Datuk Redzuan Kushairi (pic), a former Malaysian ambassador to Uzbekistan and a member of the G25 group of eminent Malays, died on Friday (Feb 22). He was 69.

Redzuan died at 12.45pm at the National Heart Institute (IJN) where he was admitted after suffering a heart attack on Wednesday (Feb 20), said pioneer G25 member Datuk Noor Farida Ariffin.

“It is a great loss for me, personally. He was my colleague in Wisma Putra as a fellow ambassador as well as a very highly intelligent and effective person.

“Before the heart attack, he was busy preparing to organise a symposium on Yemen to draw public attention to the suffering of the people there due to the civil war,” she told Bernama.

The G25 website says Redzuan is also the Dato Shah Bandar and a member of the Perak Royal Council.

G25 is a civil society organisation comprised of a group of individuals, rich with experience in various fields with diverse views but a common goal and vision.

Redzuan's remains were taken to the Saidina Umar Al Khattab Mosque in Bukit Damansara and then to the Bukit Kiara Muslim Cemetery for burial after Asar prayers.

He leaves behind a wife and two children.

Redzuan graduated in International Relations and History from University Malaya before continuing his studies at the Moscow State University in Russia.

He served as the Malaysia Ambassador to Uzbekistan for two years from 1994. - Bernama 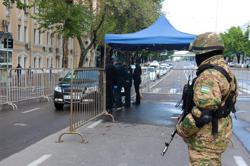 Uzbekistan extends duration of coronavirus curbs, but eases some