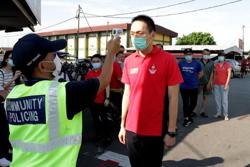 PETALING JAYA: The Finance Minister has failed to demand the Cabinet to open up Universiti Teknologi Mara (UiTM) to non-bumiputra students and abolish the quota system for public universities, says MCA.

Its vice-president Datuk Tan Teik Cheng said Lim Guan Eng, however, has reduced the allocations for Tunku Abdul Rahman University College (TAR UC), which has provided affordable education to many.

"He (Lim) relentlessly suppresses the TAR UC, which has provided affordable education to many poor students of Chinese descent.

"He does not consider himself a Chinese but a Malaysian, which is synonymous with selling out the Chinese and pleasing the Malay community.

"Lim Guan Eng has repeatedly uttered the so-called 'don't make it racial' and 'no politicising' before the Chinese community, demanding them to make requests regarding their interests and rights as a Malaysian instead.

"However, Lim Guan Eng dares not utter 'don't make it racial' and 'no politicisation' before UiTM and the Malay community.

"This shows that Lim Guan Eng's so-called 'Malaysian identity' is synonymous with selling out the Chinese and pleasing the Malay community," said Tan in a statement on Sunday (Jan 13).

On Wednesday (Jan 9), former UiTM pro-chancellor Tan Sri Dr Arshad Ayub suggested that the varsity could be opened to non-bumiputra, but only for postgraduate courses to ensure a competitive balance among the various races in the country.

However, UiTM's current vice-chancellor Prof Emeritus Datuk Dr Hassan Said said that the university would still retain its original policy to accept Malays and bumiputra only.

Tan also said that prior to becoming a minister, Lim and others from DAP had criticised the former Barisan Nasional-led government for slashing allocations for TAR UC.

However, Tan said the Pakatan Harapan government failed to increase the allocation.

On Dec 6 last year, it was announced in Parliament that the government will only provide the institution with a development fund of RM5.5mil but not the RM30mil matching grant.

Tan said Lim and DAP have also "gone rogue" by demanding MCA to cut ties with TAR UC and highlighted the concept of separating politics from education as justification.

"They have abused their powers and government resources in lambasting their opponent, making TAR UC and its students the punching bag.

"If Lim Guan Eng has the guts, please apply the concept of separating politics from education on all public universities, rather than 'playing a Malaysian minister' who does not identify himself as a Chinese, and is only keen to suppress TAR UC and the Chinese community," said Tan.