IPOH: He was born blind, but that did not stop Azhar Ibrahim from opening his own workshop to repair motorcycles in Batu Gajah.

Ever since he was seven years old, he loved to hear sounds, in particular those of motorbikes, said the 36-year-old, who has been operating his business for the past 10 years.

After learning about handling and fixing bikes from a friend, Azhar set up a motorbike repair workshop in 2008.

“I started out servicing customers at a small space in front of my house. A few friends then posted my story on social media and it went viral.

“Five years after that, I received cash aid from the government to get more tools and build a proper workshop,” said Azhar at his shop in Kam­­pung Batu 6, Jalan Tanjung Tua­lang.

Previously, Azhar worked as a masseur and earned at least RM800, in addition to a monthly RM400 aid from the Social Welfare Department every month.

People are often puzzled about Azhar’s occupation, given his visual disability.

“All I can say is that I am grateful for this gift from God,” he said.

In 2013, under the Business Incen­tive Assistance Scheme for Disabled Persons, Azhar received some RM11,000 to help him develop his business.

He has always wanted to be financially independent.

“My mother did not raise me differently from my siblings and I did not use the walking stick. 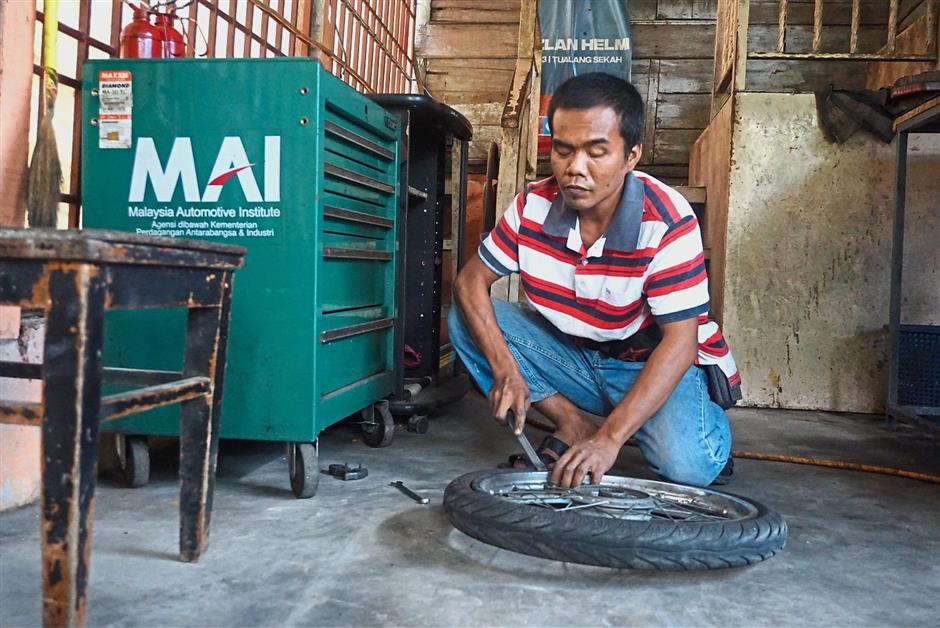 Independent businessman: Azhar has been operating his workshop since 2008.

“Our family was poor ... but it was enough for my parents to put food on the table.

“As children we earned our own money, so I did not want to rely on my parents,” he said.

His workshop is located in front of his parents’ house, but Azhar lives alone in the shop.

“I work alone, but I get help from friends to buy tools or spare parts.

“Most of the people who come here are locals, but I have a cus-tomer from Shah Alam who occasionally comes here to get his bike fixed,” he said.

“Azhar is one of a kind and should be an inspiration to all job seekers.

“He did not rely on anyone to get him a job, but created his own path instead,” said Mahfuz.

He said as chairman of the Tangan Emas Perdana Menteri award, he would suggest the creation of an award to honour persons with disabilities.

State Health, Environment and Human Resources Committee chairman A. Sivanesan, who was also present, said the state would donate RM5,000 to Azhar for his business.

“I am thankful for the help I received today. To everyone out there, whether they have disabilities or not, keep going and never give up.

“We need to learn to be independent,” said Azhar.