He said that he and his enforcement officers had spoken to the workers at the glove-manufacturing factories on the matter.

"They (Top Glove) have a mechanism of taking care of the workers, and based on my ministry's knowledge, they work within the framework of the law," he said, adding that the glove producer had not done anything wrong.

Kulasegaran pointed out that according to the Employment (Limitation of Overtime Work) Regulations 1980, workers are entitled no more than 104 hours of overtime per month.

"In some companies, some employees insist on working longer hours to earn more money, to send back to their countries. This is beyond the employer," he noted, adding that the employers should abide by the regulations as well.

The minister said this at a press conference after visiting Top Glove's Factory 25 in Klang on Monday (Dec 10).

The video recording of the press conference was obtained from Kulasegaran's Facebook page.

The report stated that Top Glove and WRP supply rubber gloves to the United Kingdom's National Health Service. It added that Nepali and Bangladeshi workers in Top Glove alleged that the factory was "mental torture".

Kulasegaran also noted that his enforcement officers have visited 22 of 35 Top Glove factories to check on working conditions since Friday (Dec 7).

"I'm not too sure how these allegations came about," he said, adding that people should not be "spreading fake news" about the company.

"We take care of the well-being of our staff, workers and stakeholders, and ensure that the business is sustainable in the long run," he added. 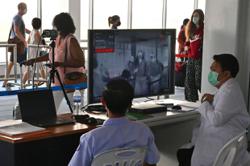