Lifeline initiative for Dayaks pays off

PETALING JAYA: No matter where they may be, John Wan Usang and Juvita Tatan Wan always make it a point to return to their longhouse in Long San, upper Baram.

With every trip back to their hometown, they realised that their communities in Sarawak were not only being left behind, but were also losing their cultural heritage.

This led to The Tuyang Initiative, co-founded by John, 64, and Juvita, 34.

Considering themselves the “lucky ones” who had the chance to further their education and to work with various multi-nationals, they felt that it was their responsibility to help find ways for their communities to thrive and yet preserve their traditions, arts and culture.

“We saw the world growing but it wasn’t the same for our aunts, uncles, cousins and our community,” said Juvita.

“It became The Tuyang Initiative’s mission to find ways to provide sustainable economic opportunities and also ensure the preservation and development of the cultural heritage for the Dayak commu­nities,” she said.

The Tuyang Initiative works with other communities in Sarawak to come up with performance art pieces, workshops and showcases.

It has collaborated with various organisations to showcase their performances and introduce talents, along with their wealth of knowledge of their unique language and traditions.

“There’s a lot of misconception on the indigenous communities of Sabah and Sarawak. 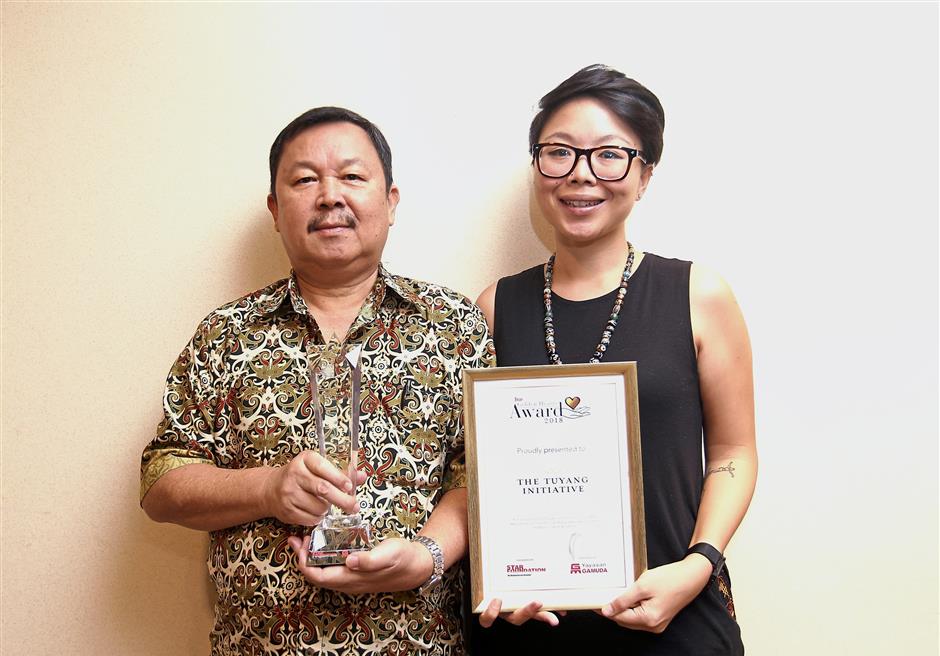 Co-founders of The Tuyang Initiative John Wan Usang (left) and Juvita Tatan Wan (right) with the Star Golden Hearts Award 2018 during the ceremony at Menara Star.

“You’ve got your token Kadazan and Iban ‘representation’ in your Merdeka Day ad, and people see these different communities as one and the same, but that’s not true, we’re so diverse.”

“These showcases allow people to take a glimpse into the smaller Dayak communities of Sarawak,” said Juvita.

The Tuyang Initiative’s efforts were recognised at The Star Golden Hearts Award 2018.

With this recognition, she hoped that more doors would open for them that would lead to a better understanding of the communities and their way of life.

“The way we work is that we try to create conversations and not from a superficial level,” said Juvita.

“We always bounce ideas back and forth and it’s not us telling them how they should do things.”

“Everyone has an active role to play and at the end of the day.

“It’s in the hands of the community,” said Juvita.

Some of their efforts sees them working with master traditional musicians, arts and craft practit­ioners for cultural demonstrations, exhibitions as well as classes and workshops.

One of their key talents includes Mathew Ngau, a sape master who has more than 30 years of expe­rience.

“There is so much more that can be done to bridge the gap between the east and west, and we hope that there will be more avenues for east Malaysian voices to be heard.”