PETALING JAYA: With traditional and complementary medicine not having to put up with stringent re­­gulations and clinical standards required of pharmaceutical pro­ducts, concerns are being raised about dubious herbal remedies.

Pharmacologist Prof Dr Yam Mun Fei said there was a problem with the Health Ministry’s regulation of the herbal medicine market.

“So far they do not have any law to effectively control illegal practitioners.

“Let’s say you prescribe a traditional Chinese herb product in powder or dry form without processing it into a tablet or other pharmaceutical dosage form.

“You do not need to register this product but it could create adverse health effects,” he said.

Doctors said many harmful pro­­ducts slipped through as the regulations did not hold traditional products to the same stringent standards as pharmaceutical pro­ducts.

All pharmaceutical products, including health supplements and traditional medicine, must be registered with the Drug Control Autho­rity before being marketed locally, as clearly stated under the Control of Drugs and Cosmetics Regulations 1984.

However, the Drug Registration Guidance Document states that the registration exempts “traditional preparation containing plants, animal parts or mineral substance or a mixture of these substances of natural origin that is produced only through drying, without any treatment or process involved”.

This would include raw herbs.

It states that “extemporaneous preparation (a mixture of ingre­dients) prepared and given directly to the patient by any traditional and complementary medicine practitioner during the course of treatment is also exempted”.

Further complicating the issue is that herbal products in the form of food supplements and drinks are classified as “food” instead of pharmaceuticals, depending on its composition and claims.

The National Traditional and Complementary Medicine (T&CM) Blueprint 2018-2027 stipulated that traditional products are subject to similar criteria for regulation, surveillance, licensing and adverse drug reaction reporting that have been established for pharmaceutical products.

However, it also said these pro­ducts are not directly regulated; there is no proper mechanism to monitor and regulate the quality of its medicinal materials throughout the supply chain.

In 2016, the ministry established a T&CM Council and T&CM Act to integrate T&CM into the national healthcare system, but it only regulates practitioners and services like acupuncture.

Traditional products are under the purview of NPRA and governed by at least nine laws, including the Sale of Drugs Act, Dangerous Drugs Act, Poisons Act, Medicines (Adver­tisement & Sale) Act, and the Wild­life Conservation Act.

But doctors said even registered products could be risky – despite growing state-funded research, traditional products are still largely based on anecdotal claims rather than scientific evidence.

According to Health director-­general Datuk Dr Noor Hisham Abdullah, the registration of traditional products was “based on claimed benefits” as specified in monographs, pharmacopoeia and related reference sources.

He said these products contained herbs that were referred to as “traditional use from generation to ge­ne­­ration” and the recommended do­­­sage was based on such referen­ces.

“Traditional products are eva­luated for the quality and safety of their active ingredients only,” said Dr Noor Hisham.

All product samples must pass a pre-registration and will undergo a post-registration, post-marketing sur­veillance sampling, which in­cludes tests for heavy metals and microbial contamination test, and screening of adulteration with Western medicine.

However, traditional medicine practitioners said the current laws were adequate but that the unregistered products and unlicensed practitioners posed a concern.

“They advertise on WhatsApp, Facebook and Instagram. This area is not under the ministry’s purview and must be solved,” he said.

Choo Teik Liang, who is the secretary-­general of the Malaysia Federation of Chinese Medicine Dealers and Practitioners Asso­ciation, blamed “merchants without conscience” for producing unregistered pro­ducts and fake re­­gistered products.

According to the Health Ministry, it responds actively to product complaints and has seized 5,487 unre­gistered and counterfeit traditional medicines with a total value of RM13.1mil this year.

The ministry’s Medicine Adver­tisement Board has also acted 64 times against traditional product advertisements with unreasonable or baseless claims.

It said there were a total of 13,385 registered traditional products and 16,050 local practitioners who vo­luntarily registered with the T&CM as of October.

However, the number of unregistered products and practitioners is currently unknown as the council is still in its first phase of implementation.

The date for phase two, which involves regulating registered prac­­­titioners, has yet to be announced.

Herbal medicine may have deadly side effects, say medical experts

Call for stricter control on import of herbs 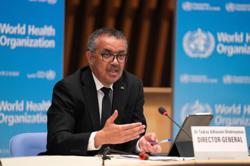