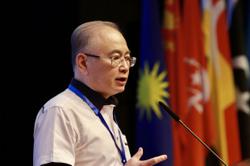 “I would advise that next year, we will consider (more allocations) but we want to be sure that there is a clear separation between education and politics.

“Both UTAR and TAR UC must not be owned by MCA,” said Lim in his winding-up speech for his ministry on Budget 2019.

He was replying to a question by MCA president Datuk Seri Dr Wee Ka Siong on why the government had slashed funds for the two institutions.

Dr Wee pointed out that the government had merely provided a RM5.5mil development fund for UTAR and TAR UC but not any matching grant.

Lim said there could be different forms of allocations for both the institutions if they were not owned by MCA, reiterating that politics and education needed to be separated.

“We cannot give matching grants to all schools. This would mean an outflow of money which we cannot bear,” he said, explaining the reason for only providing the development fund but not the matching grant.

Dr Wee, however, argued that the matching grants were vital as these would help ensure lower student fees at both institutions.

Lim insisted that MCA had a RM2bil fund, to which Dr Wee rebutted, saying that both Utar and TAR UC were developed through public and government funds.

Dr Wee said the institutions spent RM100mil to develop campuses in Sabah and Pahang without asking for government assistance.

Lim said it was best that the Malaysian Anti-Corruption Commis­sion (MACC) investigate the matter.

“If you still deny that MCA did not receive funds from 1MDB, then let MACC investigate,” said Lim.

Dr Wee then questioned the relevance of linking 1MDB to the education funds. “Why are you mixing the issue of 1MDB and the universities?” he asked.

Lim then said: “You can hentam (bash) me in the Chinese media that I am anti-Chinese. Never mind.

“I am ready to accept because this is the principle of financial management that the government needs to uphold.”

Later on Facebook, Dr Wee wrote that he felt very disappointed by Lim’s reply, adding that it was obvious the Pakatan Harapan government was punishing MCA and it did not consider TAR UC students were mostly from Chinese middle and low-income families.

“I would like to stress that MCA, as the founder of TAR UC, has never taken a sen out of the institution.”

Lim, said Dr Wee, also disregarded the fact that TAR UC was a non-profit educational institution that had produced over 200,000 alumni.