Wild animals for sale via mail – unusual but not new

By VINCENT TAN and ILI AQILAH

PETALING JAYA: Using the postal system to traffic animals and other protected wildlife is not common – but not new either, said wildlife and conservation groups.

Sending animals by post has been done since 2014, said Serene Chng, a programme officer with wildlife trade monitor Traffic.

“From Traffic’s 2016 report Trading Faces, which assesses the use of Facebook to trade wildlife in peninsular Malaysia, we have documented sellers on Facebook offering to deliver live specimens by post,” Chng told The Star.

Chng explained that using the postal route was convenient, and could be fast if using express post, and levels of detection can be low. 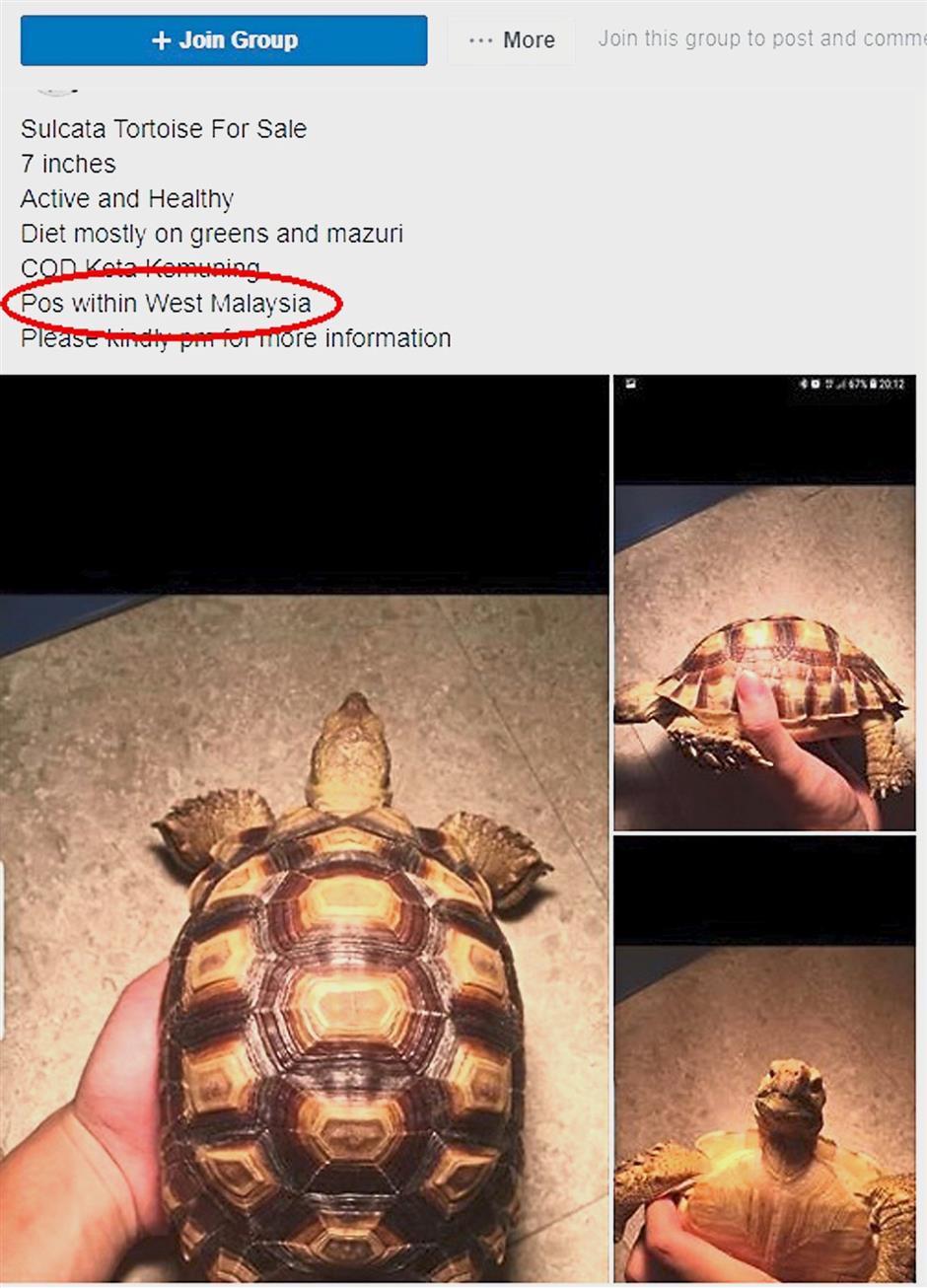 According to wildlife trade monitor Traffic, reptiles become relatively inactive at cooler temperatures, or its easier to keep them quiet with a big meal.

“It is worth noting that wildlife is not only sent via parcel post, but also postal cargo, where larger volumes of wildlife parts can be transported,” she said.

The postal system was also preferred, Chng said, for dealers to avoid cash-on-delivery scenarios and the likelihood of being caught red-handed.

To keep animals quiet during transport, Chng said dealers would sedate and immobilise the creatures, while reptiles – including snakes – remain relatively inactive at lower temperatures, or were fed a large meal to keep them quiet.

In fact, there has been at least one case of the Department of Wildlife and National Parks (Perhilitan) intercepting a package shipped from Taiwan in 2014.

The package, seized at an Ipoh post office, was picked up after Malaysian Quarantine Inspection Services Department scanned the package and found three transparent plastic containers which held one viper, toads and various insects. 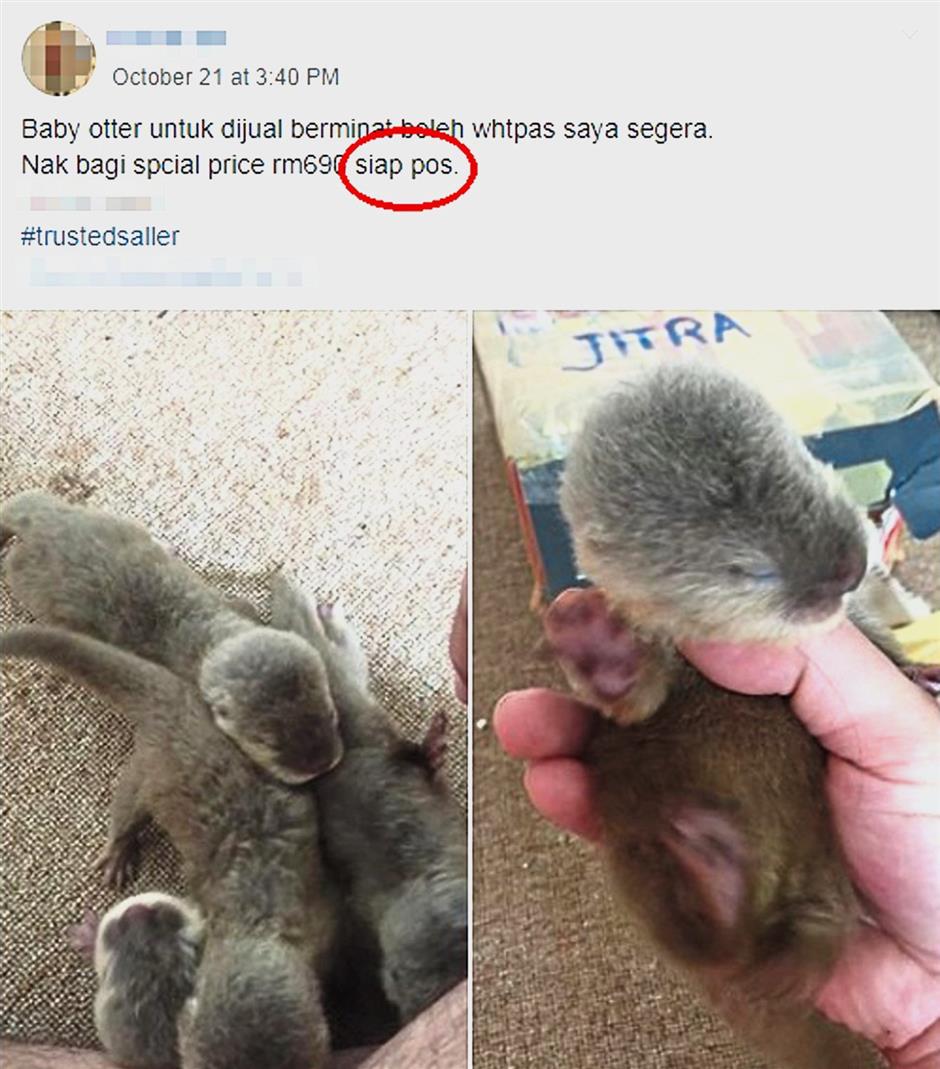 Mail order animals: Protected animals such as otters and tortoises being sold on Facebook groups with the poster stating that postage of the animals was possible.

Another news article, quoting a state PosLaju spokesman, wrote that senders would falsify the shipment details by declaring the content as mundane items.

Pos Malaysia’s services have also been used to smuggle banned animal parts, such as pangolin scales.

A check on a few Facebook groups revealed a variety of animals, ranging from arachnids, tortoises, baby otters to even a full-size white-bellied sea eagle for sale, with the vendors advertising their willingness to “post” the animals.

Meanwhile, ZoologiMy, a conservation researchers’ collective, stated that using the postal system to deliver animals placed both animal and postal workers at risk.

The collective’s spokesman Nor Arlina Amirah Ahmad Ghani said aside from bites, there was the possibility of exposure to zoonoses (animal-borne diseases).

“While we believe PosLaju has done their best to ensure that only safe packages are handled, more enforcement needs to be in place so that live animals are not transported through such means,” she said.

She added that Pos Malaysia needed to set rules in place for consumers, and that aside from tightening enforcement and conducting random checks on mail packages, the public also needed to be educated.

In a press release, Pos Malaysia said it was aware of the python delivery, and stressed that the act of mailing packages containing animals, including insects, eggs, larvae, birds or ivory, was prohibited.

“For consumers’ awareness, if our staff detect any prohibited items being mailed, they will not accept the package for delivery, or if detected during the journey, it will be detained.

“The package will be managed in any method deemed appropriate by Pos Malaysia, and in half the cases, the sender can be charged in court,” Pos Malaysia stated.